B1A4’s new mini album will be ‘Rollin” with hits

B1A4’s new mini album will be ‘Rollin” with hits

There isn’t long left until B1A4 make their comeback!

The quintet has been slowly feeding fans new teasers in the lead up to the release of their seventh mini album ‘Rollin’‘. B1A4‘s latest teaser is the official tracklist for their mini album, which is sure to get BANAs excited! Take a look below! 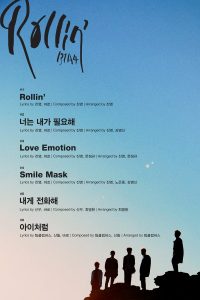 ‘Rollin’‘ will contain six new tracks, all of which have at least one B1A4 member credited as a lyricist or composer. The group’s title track ‘Rollin’‘ was written, composed and arranged by member Jinyoung, with Baro also contributing to the lyrics. Jinyoung rose to prominence as a songwriter during the first season of ‘Produce 101‘, where he composed ‘In the Same Place‘ for the eventual winners of the show’s ‘concept battle evaluation’. Despite gaining a lot of attention for his songwriting skills through ‘Produce 101‘ Jinyoung has composed a number of tracks for his own group, including B1A4‘s title tracks ‘Baby I’m Sorry‘, ‘What’s Happening‘, ‘Solo Day‘, and ‘A Lie‘.

In addition to this, members CNU and Baro have been regular contributors to a number of B1A4‘s tracks. Another note is that CNU was involved in writing the lyrics to B1A4‘s 2012 hit ‘Beautiful Target‘. Baro has written the rap section for all six tracks on the group’s upcoming mini album. 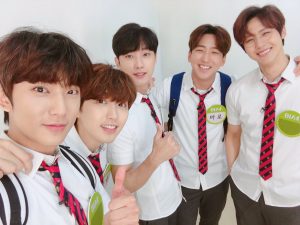 B1A4‘s upcoming title track ‘Rollin’‘ is described as a song “expressing the complicated feelings of love” through the group’s signature vibe. According to a statement from WM Entertaiment, the group’s new mini album ‘Rollin’‘ is set to express the different personalities of the five members through a variety of musical styles.

Scroll for more
Tap
TS Entertainment drops the introduction clip for upcoming boy group TRCNG
Get a preview of the lyrics for Niel’s new song!
Scroll