Officially Kmusic would like to wish 2PM a very happy anniversary! 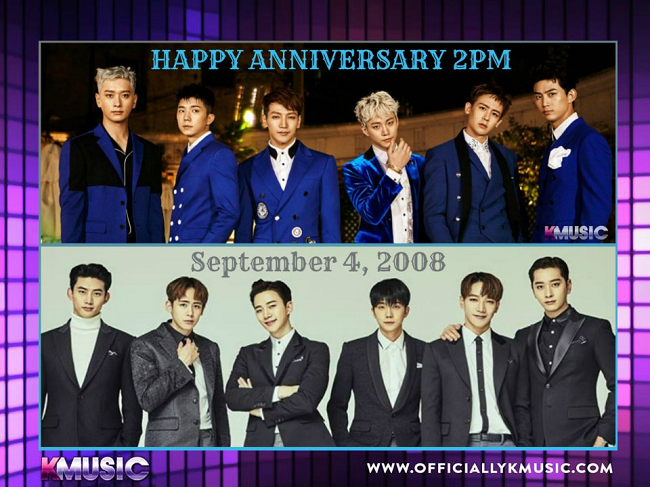 Things to know about Jun. K:

He chose JYP over YG when he applied to be a trainee.

His former stage name was Junsu, but now it’s his legal name.

He use to be a “troublemaker,” often going against JYP’s rules, such as breaking curfew and getting tattoos.

He can speak English and conversational Japanese.

In 2014 he released his first solo album.

Place of Birth: Rancho Cucamonga, California, USA or the Kingdom of Thailand in the capital city of Bangkok (it’s unclear where he was born; just that he lived in both counties when he was younger).

Things to know about Nichkhun:

He parents are ethnically Chinese, but they are from Thailand (both parents were born on Thailand), therefore he holds dual citizenship in both the US and Thailand (as well as South Korea).

He studied in Thailand, South Korea, New Zealand and the US growing up.

He was discovered by JYPE in Hollywood.

Thailand, like South Korea, has mandatory military enlistment, but he was grained an exception due to his US citizenship.

He was paired with f(x)’s Victoria in We Got Married.

He’s the only non-Korean member of the group.

Things to know about Taecyeon:

He holds dual citizenship with the US after his family moved there when he was 10 years old; however despite this he chose to complete his military enlistment in South Korea and will enlist in 2017.

He was on We Got Married with Taiwanese actress Emma Wu.

He can speak Korean, English and Japanese.

He made his solo debut in 2017 with his first album as a gift to his fans before leaving for the military.

He’s been in several movies and dramas.

Things to know about Wooyoung:

His father was at first against him being an idol; but now he’s accepted it and often writes to him.

He was in We Got Married with Park Se Young.

Things to know about Junho:

He can speak Korean, Japanese and a little bit of English.

He’s been in several dramas and movies.

Things to know about Chansung:

Source: (For the remaining members of 2PM) Kprofiles