NCT, which stands for Neo Culture Technology, is one of K-pop’s biggest boy groups, and they are gradually becoming one of the industry’s most popular groups. However, people tend to get confused about them, particularly because of their many sub-units and unlimited number of members. They are SM Entertainment‘s latest project group, and definitely one of their most active. NCT 127 will be making their comeback on October 12th with title track ‘Regular‘ and first full-length album ‘Regular-Irregular‘. Before their comeback, here is everything you need to know about NCT, all compressed into one article.

Before they debuted, all the members of NCT were SM Rookies, along with the members of girl group Red Velvet. SM Rookies are SM Entertainment‘s pre-debut training team. Many of the members joined as early as 2013. Johnny is one of their earliest trainees; he trained alongside EXO. The members were cast through street-casting, recommendations, and local entertainment shows. The majority of NCT‘s foreign members were also cast through the SM Global Audition, which is held in countries all over the world. SM Entertainment CEO Lee Soo Man aims for NCT to establish different units based in different cities around the world.

As of 2018, NCT currently has 18 members: Taeyong, Taeil, Johnny, Doyoung, Yuta, Jaehyun, Kun, Winwin, Ten, Lucas, Jungwoo, Renjun, Mark, Jeno, Haechan, Jaemin, Chenle and Jisung. Even though the majority of their members are born and bred in South Korea, there are a number of foreign members. This is in line with their aim, which is to be based in many cities around the world. 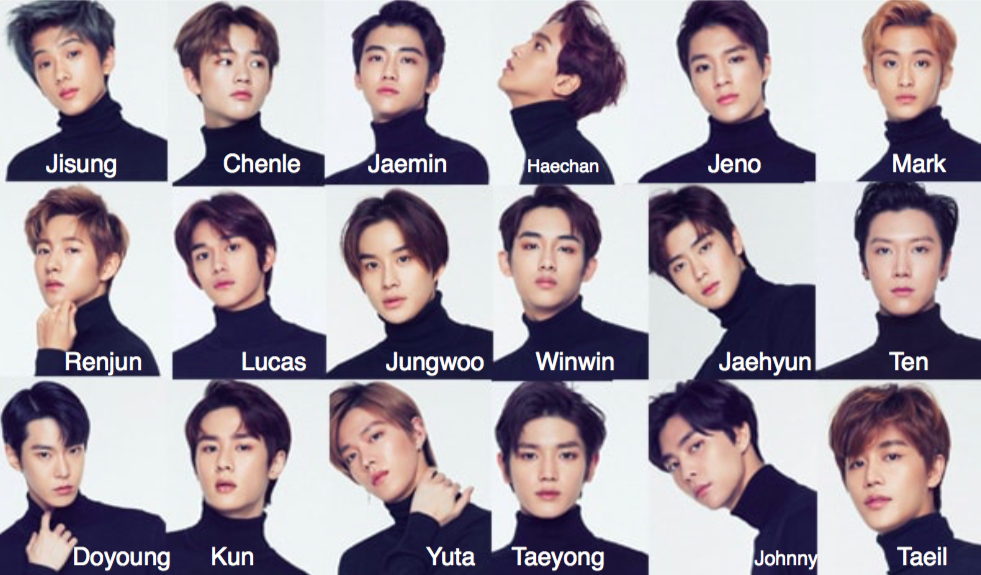 NCT U was the first sub-unit to debut. U stands for “united”, as this sub-unit is rotational. Every song has different members, depending on the concept. So far, they are comprised of members: Taeyong, Mark, Jaehyun, Doyoung, Taeil, Ten, Jungwoo, Lucas, and Winwin.

They debuted with ‘The 7th Sense‘ on April 8th, 2016. They finally made their comeback this year on February 18th with ‘Boss‘, featuring the two new NCT members Lucas and Jungwoo, who were former SMROOKIES. ‘Boss‘ was also the first song released on NCT 2018‘s ‘Empathy‘ album. Out of this whole album, they also have other songs, all of which are comprised of different members. This unit tends to execute the cool concept through their music more than the other units. However, their vocal line (Doyoung, Jaehyun, Taeil) are skilled in singing ballads. This showcases their vocal talent and versatility as singers.

NCT 127 is based in Seoul, as 127 are the longitudinal coordinates of the city. They are the fixed unit of the group, even though the member lineup has changed over the years. Originally, NCT 127 only had seven members: Taeyong, Jaehyun, Taeil, Yuta, Winwin, Mark and Haechan. They debuted with title track ‘Firetruck‘ and debut album ‘NCT #127‘ on July 6th, 2016. On January 4th of 2017, they made their first comeback, but this time with the addition of two new members: Johnny and Doyoung. They released title track ‘Limitless‘ and 2nd mini album ‘NCT #127 Limitless‘. That same year, they made their second comeback with ‘Cherry Bomb‘, which has been their “biggest hit” so far. Their latest comeback was ‘Touch‘ on March 18th this year, which appeared on NCT 2018‘s ‘Empathy‘ album.

Recently, the group added Jungwoo to their lineup. He had previously only participated in ‘Boss‘ by NCT U as a new member of NCT. He will be included in their upcoming comeback with title track ‘Regular‘ and first full-length album ‘Regular-Irregular‘.

NCT 127 have also been active in Japan, which is where member Yuta is from. They released ‘Chain‘, the name of their title track and 1st Japanese mini album, on May 8th this year. This demonstrates the group’s expansion from their base city Seoul to other parts of the world, like Tokyo.

Similar to NCT U, their style of music is very upbeat. All their comebacks have definitely execute the cool concept, aside from ‘Touch‘. ‘Touch‘ allowed fans to see a softer and gentler side of NCT 127 that was previously hidden. It was a shock for many fans to see the members in pastel jumpers in the MV for ‘Touch‘, which was a stark contrast from their other darker title tracks like ‘Limitless‘ and ‘Cherry Bomb‘.

NCT Dream is a sub-unit based on age. Their current lineup depends on the ages of the members. To be in this sub-unit, the members have to be under 20. Once they hit this age, they will graduate and enter another unit of NCT. Their lineup right now is: Mark, Haechan, Jaemin, Jeno, Renjun, Chenle and Jisung. Mark is the only NCT member in all three sub-units of the group. He is only 19 years old, but he has already had at least 11 comebacks. So far, Mark is the only member that is set to graduate from NCT Dream since he is approaching this age. He made his last comeback with title track and second EP of the same name ‘We Go Up‘ last month.

NCT Dream debuted with their single ‘Chewing Gum‘ on August 24th, 2016. They made their first comeback on February 8th with title track ‘My First and Last‘ and single album ‘My First‘. However, Jaemin did not participate in this comeback due to health issues. He was also absent for their next comeback with title track and mini album ‘We Young‘. Jaemin finally returned for their last comeback with Mark, which was ‘We Go Up‘.

It seemed like NCT Dream and NCT 127 had switched concepts when participating in NCT 2018‘s ‘Empathy‘ album. ‘Go‘ and ‘Touch‘ are polar opposites; ‘Go‘ is extremely dark while ‘Touch‘ features pastel colours. It was refreshing for fans to see these two respective units going out of their comfort zone and trying out new concepts. NCT Dream usually engage in cute concepts for their MVs since they are NCT‘s teenage unit, but ‘Go‘ and ‘We Go Up‘ has displayed their ability to explore different concepts.

Not much information about this upcoming sub-unit has been revealed yet, except that they will be debuting soon. There are currently five members of NCT 2018 that will be in this sub-unit: Kun, Winwin, Lucas, Chenle and Renjun. Even though they hail from different units, they seem to have a very brotherly bond with each other. These five members once did a V-Live in Mandarin Chinese, which hinted at their impending debut. They even took turns to speak in their own dialects, for example Lucas speaking Cantonese. Jungwoo and Jaemin also joined them at one point during the V-Live, in which they spoke in Chinese while the other members encouraged him. 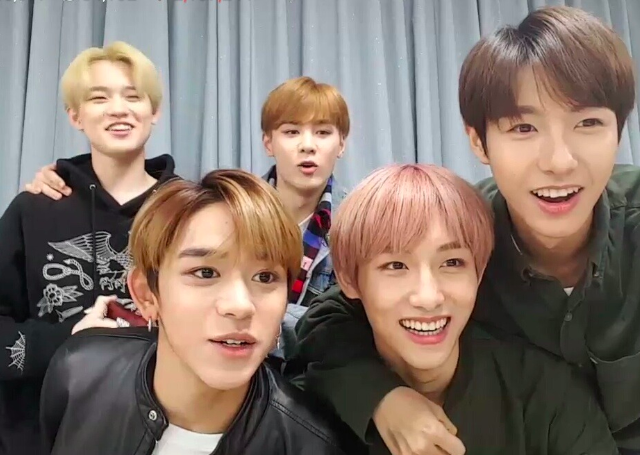 The current SMROOKIES, Xiao Jun, Hendery, and Yang Yang, are likely to debut with NCT China as they are all of Chinese descent. We cannot wait to see what NCT China have in store for us.

What to look forward to in the future:

NCT have big plans for the future. As mentioned above, NCT 127 will be making their comeback on October 12th with title track ‘Regular‘ and first full-length album ‘Regular-Irregular‘. They have already released several teasers and highlight medleys to get fans excited for their return. Furthermore, we can look forward to Jungwoo‘s participation as a new member of this sub-unit. Currently, NCT 127 are in the U.S. to promote their upcoming album. They will be appearing on ‘Jimmy Kimmel Live!‘ on October 8th, before performing on ‘Mickey’s 90th Spectacular‘ TV special. This is set to air on November 4th. Furthermore, they will be attending the American Music Awards red carpet on October 9th. This is a huge achievement for an up-and-rising group like NCT 127, who only debuted two years ago. And this is only the start.

SM Entertainment has also recently released teasers of the current SMROOKIES. Xiao Jun, Hendery and Yang Yang are Chinese trainees who are likely to debut with NCT China. They already have stunning visuals and interesting fashion sense. Yang Yang in particular has garnered a lot of attention due to his nationality as a German. His ability to speak Mandarin, German and English fluently has fascinated people already, as there are not many K-pop idols with a European background.

NCT is also preparing to expand globally, especially in the Asian region. In addition to the debut of NCT China, they have also set their sights on Vietnam. Vietnam has a huge industry for K-pop to flourish; one of the locations of the 2017 Mnet Asian Music Awards was Ho Chi Minh City. NCT Vietnam is also set to debut in the future. 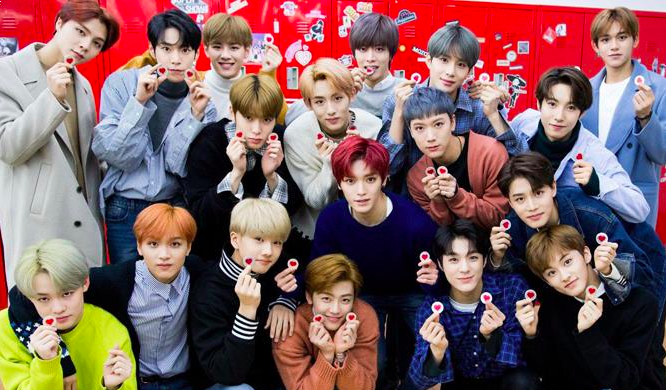 NCT may seem like a complicated group due to their many sub-units and unlimited amount of members. However, their uniqueness as a group has allowed them to have a huge global fanbase. Their music never disappoints, and they are always entertaining on variety shows. They are bound to rise in the future. With the debut of even more units, they are achieving all their aims as they continue to expand around the world.

Scroll for more
Tap
Combining his role in Astro with a burgeoning acting career – Cha Eun Woo can do it all!
Highlight’s Yang Yoseob confirms military enlistment date
Scroll