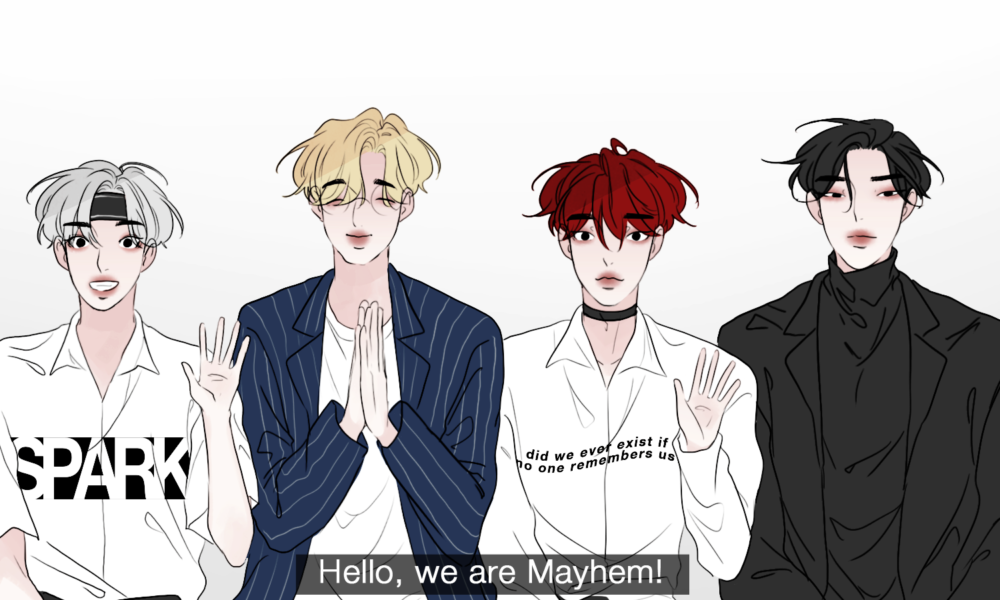 Today’s interview is a true treat for fans that have grown with their artists, and have longed to see the groups that they’ve supported from the very beginning gain the representation that they deserve. For many fans, Mayhem is that group.

Mayhem is a 4-member group under High Class Entertainment that was formed in June of 2018. Their most recent comeback on February 14th was not just to promote their new album “NOT FOUND”  but was a means of celebration for an audience that has been anxiously awaiting the new title track “Find A Way”.

Mayhem is very active on their social media platforms, members Minsoo, Daehyun, Wyld, and D.Min, casually interact with their fans and recognize their support. With pop-up videos of special recordings, live videos, and casual interactions, Mayhem has maintained a special bond with their fans. Relationships like these are what distinguishes Mayhem as one of the most interactive groups in the industry.

We’re going to do a deeper dive into the lives of MAYHEM and see if we can answer some of the fans most anticipated questions, plus some of our very own!

[KMUSIC] : We wanted to kick this interview off by showing your fans more about how each of you think of each other! We have some notepads here for you, and we’d like for you each to write one compliment that really sums up the person to your right! This can be something you think of when you think of them, something that you really admire about them, or just their fan-favorite aspect in your eyes! You’ll just show the camera your whiteboard and each member will get to see after and elaborate, if they’d like.

[KMUSIC]: This question was quite possibly one of the most requested questions. Which member of the group has the traits of your ideal type? If you care to elaborate, what traits does that person have that you value?

[DAE]: I also think you’re the easiest to talk to.

[KMUSIC]: Whether you’ve been training for years or born with the innate feel for dancing, it can be hard to keep up sometimes with intense choreography. Which of you picks up choreography quickly, and which of you takes the longest to perfect it? Can you show us the move/dance trend you’re most proud of?

[D.MIN]: Minsoo used to take dance classes before he debuted, so he naturally picks up the choreography quickly.

[WYLD]: I was the last to join Mayhem, so I’m still struggling with it..

[MINSOO]: No, he’s going to do the worm….someone stop him!

[KMUSIC]: The process of debuting is such a strenuous and difficult path, did any of you have any significant moments in your training stage? We see that Mayhem is the debut group of High Class Ent., was there a lot of pressure or any burden to succeed?

[D.MIN]: There were a lot of times we were worried we would never debut because the company had just started. We didn’t have the resources of other companies that already grew, so Minsoo and I went out and tried to help find other potential members. That’s how we had gotten Daehyun and Wyld into the group. I don’t think it ever gets easier even after debuting. We still want to be the very best versions of ourselves and deliver a strong performance for our fans no matter where it is.

[KMUSIC]: Although we received so many questions from fans for you all, we wanted to stick to the ones that provided more insight for the audience, and could focus on Mayhem as a group of creatives. You are all so talented, but in the end you’re also just people, pursuing a career in what they love. Do you have anything you want to say to your fans, or any special messages for anyone else?

[DAE]: We want to first thank Mayniacs for all of the support. It’s been motivating us to work harder to someday be able to meet everyone and thank you guys personally. Whether you’re a new Mayniac or old, or were once with us but moved on, we are grateful that you had shared your time with us at one point. For Mayniacs in the future, we really can’t wait to meet you guys! I hope we’ll share many memories together. Next, I want to thank my mom and dad for giving birth to m-

Thank you to High Class Entertainment, Mayhem, and Webtoon for allowing us the opportunity to create a platform for artists to share with their fans!