OCN has released official stills of TVXQ’s Yunho and Choi Dae Chul ahead of their debut in upcoming romance drama, ‘Melo Holic.’

The show will be comical, as it follows the two men and their differing dating styles. Check out the stills below, Yunho looks cute as a university student in a backpack and sweater, while Choi Dae Chul charms in a cheeky smile and blue blazer. 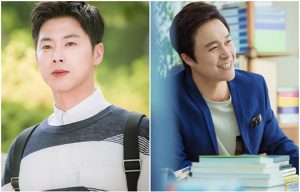