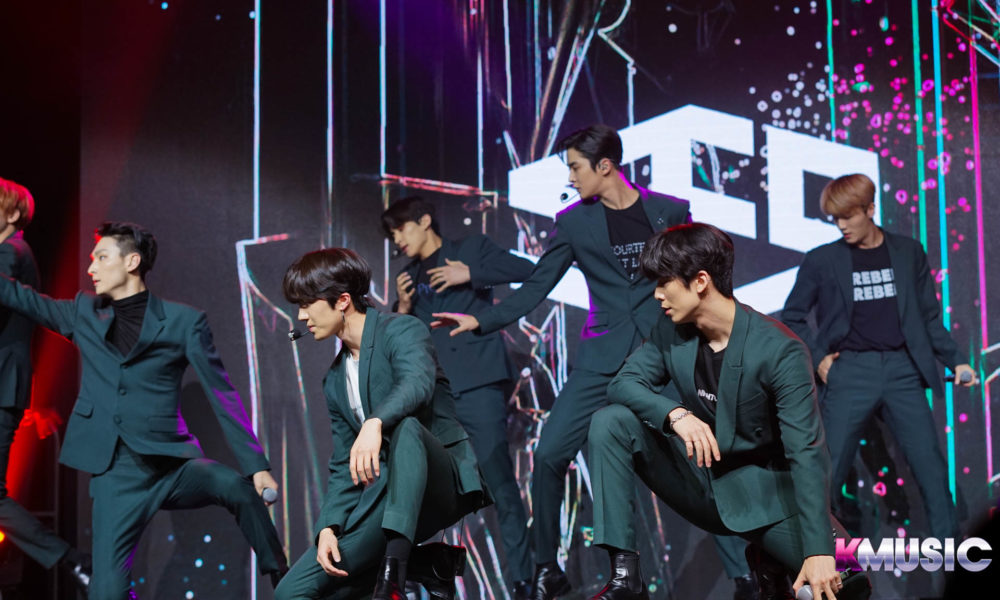 With the oncoming hubbub around COVID-19, the first half of 2020 looked thin in terms of concerts in Sydney with growing uncertainty. But luckily, the OLA Music Festival was here to go ahead. After postponement and a shake-up in the list of performing artists, the OLA Music Festival bounced back wonderfully with their long awaited event in Luna Park, bringing stars SF9, BewhY and Jessi to Sydney.

Pre-show, VIPs were given the chance to interact with the artists on a conversational level. BewhY strut onto stage like a confident model in his finest outfit. After asking the crowd about which artist they’d like him to collaborate with the most, the suggestion of IU got the most support from the screaming fans. SF9 were also greeted warmly by the Sydney audience, asking fans if they were looking forward to the ‘sexy stage’ coming up, and requesting suggestions on where they might be able to see kangaroos.

“What should we eat in Sydney?” The boys asked.

“Maccas!” An audience member cried out.

Next, Dj Nick Kim and Dj REKO played back to back sets for the crowd while the artists got ready. Dj Nick Kim played a majority girl group KPOP set, drawing on the classic ‘Good Day’ by IU and songs by Twice, Everglow and Girls’ Generation. Dj REKO on the other hand, went for clubbier bangers worthy of a 2am set deep in the night, with K/DA‘s ‘POP/STARS‘ and rave tracks.

A local rapper named Mike Cho also performed, with his tracks made “for all the 90s babies”. He got the crowd accustomed to the exciting vibe of the evening and couldn’t help but take a selfie every now and then.

BewhY was the first of the 3 main artists to make his appearance, kicking off with ‘Forever‘, one of his earliest hits from ‘Show Me The Money‘.

After his first song, BewhY launched into some of his greatest hits, including ‘The Time Goes On‘, ‘9ucci Bank‘, ‘SUPERBEEWHY‘, ‘WHO YOU?’, ‘Day Day‘.

Of BewhY‘s entire setlist, ‘GOTTASADAE‘ was the biggest slapper of them all. From the opening opera-like atmosphere and eerie chants to his epic rap verses, BewhY did not disappoint.

“Is there anyone out here that didn’t know my music that came out here tonight? I hope that you enjoy the music and like it enough to show your friends,” BewhY said in one of his closing remarks.

Second came Jessi, an absolute rap queen whose stage presence and confidence beamed into the audience. Unlike the other artists, she’s spent a long time trying to make it in the industry while also spending some years in the States.

“I’ve been wanting to come to Sydney for ages y’all, it’s my first time here. Bring me down here for a tour, I’m ready. I struggled for 15 years to get here.”

She strutted her way up and down the stage like a runway model in epic pink high heels, complaining about her discomfort but willing to stick it out to complete her pink leopard look.

The queen performed her biggest hits from the past few years, including ‘Who Dat B‘, ‘Drip‘ and ‘Spirit Animal.’

Of all her tracks, the biggest crowd pleaser was surely ‘Gucci.’

Jessi’s fan engagement was off the charts, taking time to thank a set of Youtubers whom flew over especially for the concert. Prior to Jessi’s entrance too, a winning cover group launched with a performance of one of Jessi’s major songs with so much sass and energy that Jessi too performed with and embraced them. Jessi also couldn’t help but bring a few darling fans up for a priceless picture.

Finally SF9, the last act and only group of the evening was to perform.

SF9 has risen in popularity recently, with fantastic new tracks and the individual successes of Rowoon and Chani in their respective dramas ‘Extraordinary You‘ and ‘Sky Castle‘.

Straight out the gate, SF9 played their biggest song to date, ‘Good Guy‘, before then performing ‘O Sole Mio‘ and ‘Play Hard.’

“Cause I’m a good guy, yeah good guy,” the boys sang while dancing in unison.

In between a brisk setlist and quick introductions, the boys expressed their admiration of kangaroos and how they “Just saw a kangaroo outside.”

Additionally, the boys commented on the gratitude of coming to Australia in these difficult times.

As the night came to a close, it was hard to believe that BewhY, Jessi and SF9 had just performed in front of their fans, all in the same show in just one night. With 2020 off to a rocky start, Korean music fans may have to wait quite some time before another concert becomes announced. Nevertheless, the OLA Music Festival succeeded at quenching our Korean music thirst, for now.

Scroll for more
Tap
Everglow releases out of this world MV for their latest comeback ‘DUN DUN’!
LAY Starts Summer with a “BOOM!”
Scroll