Narsha has hinted at a Brown Eyed Girls comeback!

Acting as an award presenter at the 2018 Gaon Chart KPop Awards, Narsha took the opportunity to speak about her group’s activities. The singer said that “the release of a new Brown Eyed Girls‘ album keeps being delayed.” She added that although the four members of the group are currently focusing on their individual activities, they will be aiming to “release a new Brown Eyed Girls album this year”, and ended her speech by asking fans to look forward to new music from the group! 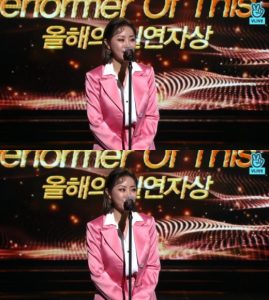 Veteran group Brown Eyed Girls have been missing from the music scene since the release of their twin title tracks ‘Brave New World‘ and ‘Warm Hole‘ from their 2015 album ‘Basic‘. Since then each of the members have been pursuing their personal careers, with rapper Miryo recently releasing a music video for her track ‘Can I See You Again‘.

We’re sure all KPop fans are hoping for a quick return to the stage for all four members of Brown Eyed Girls!