Hoya has revealed pre-release track ‘Angel’ and the schedule for his solo debut!

Hoya has revealed pre-release track ‘Angel’ and the schedule for his solo debut!

Hoya’s first mini album will be titled ‘Shower,’ and as seen on the schedule for his solo debut below, the first photo teaser will be released on March 16th. From there, new teasers will drop every few days until the official online release on March 28th! 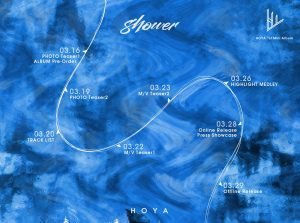 In anticipation for the album, Hoya has already dropped the MV for pre-release track, ‘Angel’. The passionate MV is starts in black-and-white and features entirely in a dimly-list warehouse. Hoya’s famed dance skills take the stage in this groovy track!

What do you think of ‘Angel‘? Are you excited for the ‘Shower’ mini album!?

Scroll for more
Tap
Golden Child asks you to be their ‘Lady’ in latest MV
LOCO says ‘POST IT’ to Jay Park in new MV
Scroll
Loading Comments...