It’s not a ‘Dream’, WJSN have started dropping comeback teasers!

It’s not a ‘Dream’, WJSN have started dropping comeback teasers!

WJSN‘s fourth mini album is only weeks away!

Last month WJSN announced that they would be making a comeback in the near future, and now the details are finally here! The thirteen member group kicked things off with an artistic poster which places WJSN‘s new logo in the centre of a magical circle. The poster is set on a parchment-like background and enclosed with by an intricate border, giving it an even more magical atmosphere. Check out WJSN‘s poster below! 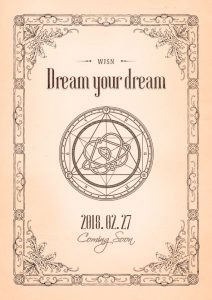 WJSN also released their comeback schedule in tandem with the release of their poster. This schedule shows that WJSN have a lot of teasers to release, with one coming almost every day all the way up until their comeback date.

Amongst the usual suspects of image teasers, a track list, and a music video teaser, WJSN have included some very cryptic hints as to what fans can expect in the lead up to their comeback.

The first four items on WJSN‘s schedule include words in Greek, adding an extra layer of mystery to the group’s already enchanting concept. Take a look at WJSN‘s full comeback schedule below! 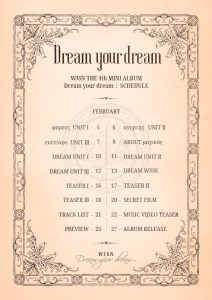 WJSN will return with fourth mini album ‘Dream Your Dream‘ on February 27!

Follow Officially Kmusic to keep up to date with the latest comeback news!

Scroll for more
Tap
Hyolyn is checking off her ‘To Do List’ ahead of comeback!
N.tic are stunning in all-white individual teaser images
Scroll