In preparation for his return, Jung Joon Young has dropped another teaser image for his track ‘Fiancée’.

In the dapper teaser image below, Jung Joon Young looks handsome has he dons a black suit, and sits facing the camera amongst a dreamy, wedding venue backdrop. 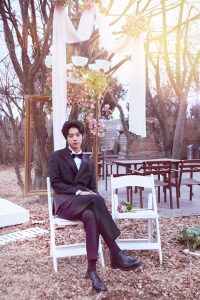 In the previous image teaser below, he wears the same suit but holds a pink rose and gives fans a sultry look. It’s obvious from these two teasers that we can expect a romantic concept from Jung Joon Young. 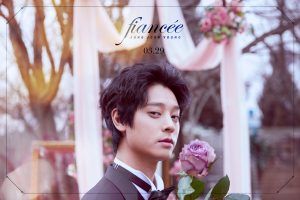 Taking the concept even further, the album will come in two versions, both of which come with exclusive post cards, CD holders – and wedding invitations! That’s right, Jung Joon Young is inviting all his fans to be his fiancée at his wedding with special wedding invitations!

‘Fiancée’ is the title track on Jung Joon Young’s upcoming album. The album will feature rapper Microdot and is partially produced by Royal Pirate’s Moon Kim.

‘Fiancée’ is set to drop on March 29 – will you be getting the album?