MAMAMOO’s Solar has dropped a surprise MV in the lead up to ‘Solar Emotion’ part 6!

MAMAMOO’s Solar has dropped a surprise MV in the lead up to ‘Solar Emotion’ part 6!

MAMAMOO’s Solar has revealed a surprise MV in the lead up to the release of ‘Solar Emotion’ part 6!

In the unexpected move, Solar delighted her fans with a cover of Kim Kwang Suk’s ‘Where The Wind Blows’. Solar’s take on the classic track is fresh, airy and gives listeners a relaxing sensation, as they get lost in Solar’s angelic voice.

In the accompanying MV, Solar frolics through beautiful scenic locations, from a beach to the woods and a meadow. The scenery is refreshing and helps give the track a strong summery/spring vibe.

“WHERE THE WIND BLOWS” OFFICIAL MV

‘Solar Emotion’ is Solar’s solo project, and the 6th part will feature four songs with accompanying MVs, as well as an LP with 11-tracks, combining songs from her entire project.

Naturally, Solar has dropped several MV teasers and teaser images in the lead up to the ‘Solar Emotion’ part 6 release. Below is her most recent teaser image which will help tide you over until April 24, when the next part of her solo project drops. 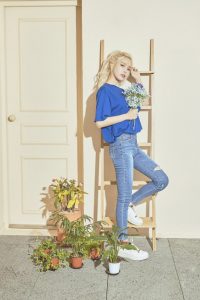 Sporting her signature blonde hair, Solar poses in blue against a ladder with a bouquet of flowers in her hand. Next to her are a bunch of plants and a door! It almost gives the impression that Solar is about to take a try at gardening!

‘Solar Emotion’ part 6 will drop on April 24th at 6PM KST – who knows what surprises Solar has in store for us until then!?