SHINee will hold their Japanese concert as scheduled

SHINee will hold their Japanese concert as scheduled

SHINee have announced that they will be holding their Japanese concert in February as scheduled.

The ‘SHINee World The Best 2018 – From Now On’ concert had originally been scheduled to be held in Japan in February. However, after the tragic loss of their member Jonghyun, SM Entertainment had asked fans to be patient while they considered their next steps, as they were unable to make a decision so quickly after the tragic news.

The remaining members have decided to go ahead with the concert. Each of them released a handwritten letter for their fans explaining the reasons. 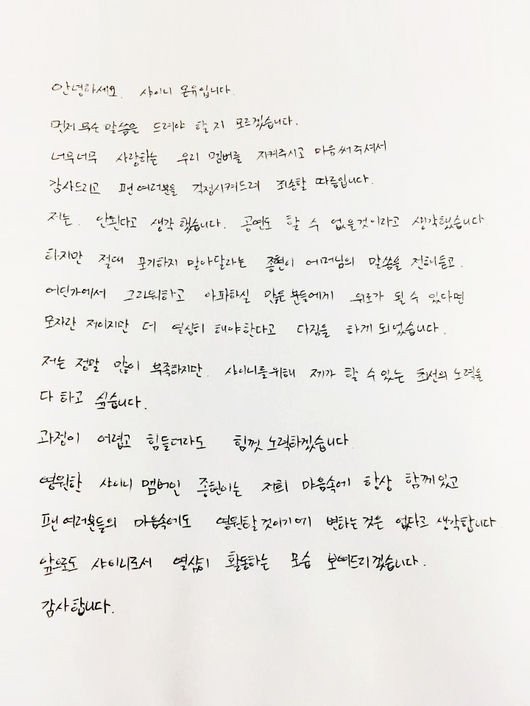 The translation of Onew‘s letter

“Hello.  This is SHINee‘s Onew.

I’m not sure what to say first.

I’m thankful that you have protected and cared about the member that we love so much, and I’m sorry for worrying you.

I thought this wouldn’t work, and that we wouldn’t be able to perform.

But Jonghyun‘s mother told us never to give up, and I believed that if we could give comfort to someone who is in longing and in pain, I should work harder even though I’m lacking.

I am very lacking, but I want to be the best I can for SHINee.

Even if the course is difficult, I will work my best.

Jonghyun is forever a SHINee member, and will always be in our hearts and the fans hearts, so I believe nothing will have changed.

I will continue to work hard as SHINee. 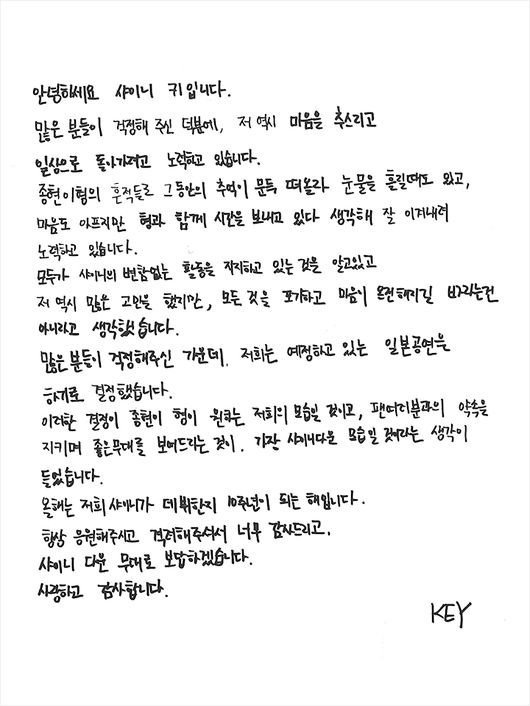 The translation of Key’s letter

“Hello.  This is SHINee‘s Key.

So many people worried for me, and I’m working to gather my thoughts and go back to everyday life.

Sometimes I cry when I see things Jonghyun-hyung left behind because of the memories, and even though my heart hurts, I’m working hard to win over it by thinking I’m spending time with hyung.

I know many people support SHINee and want us to keep promoting, and I thought a lot about it as well, but I didn’t think I wanted to give up everything for a peace of mind.  Many people are worried about us, and we decided to continue on with out Japanese concert.

This decision would be something Jonghyun-hyung wanted from us, and I believe that it’s the most SHINee-like to keep our promise to the fans and put on a good stage.

This year is SHINee‘s 10th anniversary.

Thank you so much for always supporting us and taking care of us, and we will give back through a SHINee-like stage.

I love you, and thank you.” 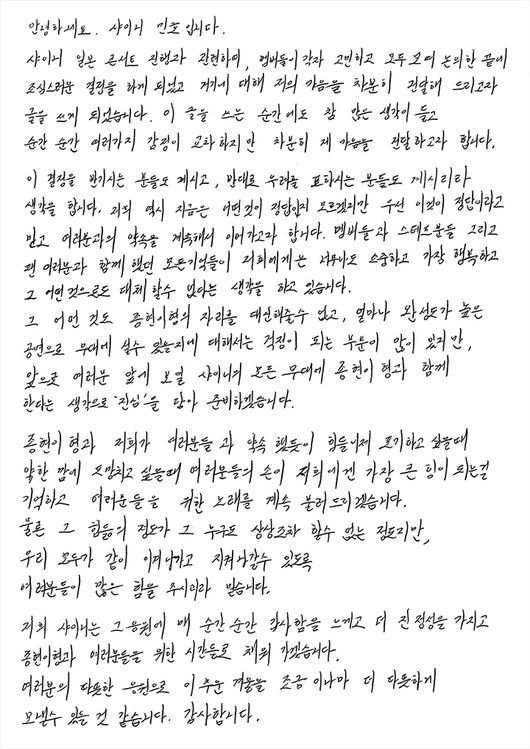 The translation of Minho’s letter

“Hello, this is SHINee‘s Minho.

Concerning SHINee‘s Japanese concert, the members each thought for himself and also gathered to talk about it, and we came to a cautious conclusion.  I am writing to relay my thoughts calmly.

While I write this, I’m having a lot of thoughts, and every moment, I feel a lot of emotions, but I want to write calmly.

All the memories we have with the members, the staff, and the fans are all so precious and happy to us, and I believe nothing else can replace that.

Nothing can replace Jonghyun-hyung’s place, and I’m worried about the quality of our stage, but I will put all my sincerity in preparations by thinking that Jonghyun-hyung will be with us on all the stages that SHINee will be on in the future.

As Jonghyun-hyung and the rest of us promised with you, when we are exhausted and want to quit, and when we want to run away because we’re weak, I will remember that your hands are our biggest strength, and keep singing for you.

It’s harder than anyone can imagine, but I believe you will give us strength so we can all overcome this and keep our promise.

SHINee will feel grateful at every moment through that support, and fill our moments for you and Jonghyun-hyung.  I think I will be able to be a little warmer in this cold winter thanks to your warm support. 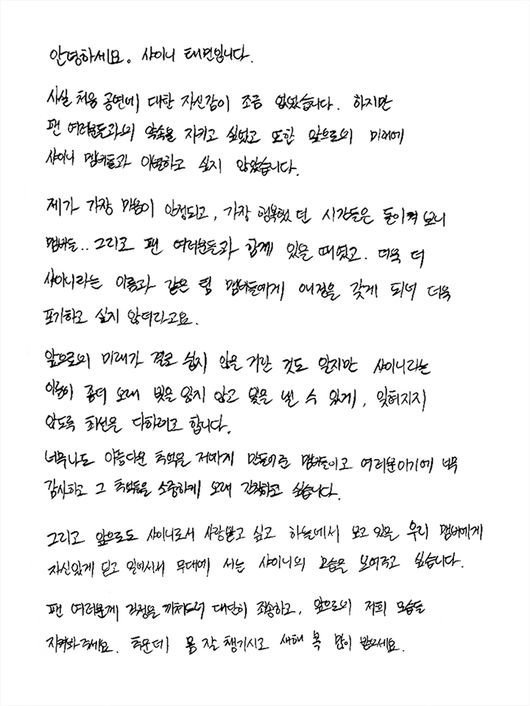 The translation of Taemin’s letter

“Hello.  This is SHINee‘s Taemin.

To be honest, I didn’t have much confidence to perform.  However, I wanted to keep our promise with fans, and I didn’t want to say farewell to the SHINee members in the future.  When I looked back to the times that I was the happiest and I had the most security in, they were moments when I was with the members and the fans.  I got more fond of the name ‘SHINee‘ as well as the members, and I wanted even less to give up.

I know the future won’t be easy, but I’m going to try my best so that the name SHINee will keep shining without losing its light or being forgotten.

The members and you are the people who made me such beautiful memories.  I’m thankful and I want to keep those memories for a long time.

I want to keep being loved as SHINee and I want to show our member in the sky that we will confidently step up and stand on the stage as SHINee.

I’m sorry for worrying fans, and I ask you keep watching us.

It’s cold, so take care of yourselves, and happy new year.”

The heartfelt and beautiful letters show us how much we the fans mean to the members.

What do you think of the letters from the members?  Let us know your thoughts in the comments below.