Can you guess what it is?

Less than two months after making their highly anticipated debut, the six members of JBJ have decided on a name for their official fan club!

In a video uploaded on the group’s fan cafe on December 7, JBJ excitedly looked over the fourteen names nominated from submissions from over 1400 fans. Potential names that grabbed the members’ attention included Dreamer, Dream, Nest, 제비단 (Jebidan), Joiner/Joyner, and Joyful.

JBJ‘s final decision was made between Hyunbin‘s suggestion Nest, meaning that the fan club would be JBJ‘s sanctuary, and Kenta‘s suggestion Joyful, which links to the group’s fan-given name Just Be Joyful. Ultimately, JBJ decided on Joyful, showing that they want their fans to be joyful during their time together! 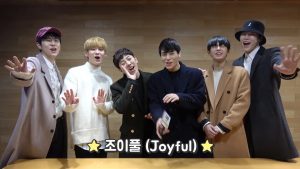 JBJ are a fan-made group made of six highly popular eliminated members from survival show ‘Produce 101‘, and made their debut on October 18 with ‘Fantasy‘. What do you think of JBJ‘s fan club name Joyful?

Scroll for more
Tap
It is confirmed that Hyun Bin and Kang So Ra has broken up.
Jisoo announces her departure from TAHITI
Scroll
Loading Comments...