11 Reasons to Start Watching ‘Descendants of the Sun’ Now

11 Reasons to Start Watching ‘Descendants of the Sun’ Now

If you are not hiding somewhere in the cave, you have probably heard about KBS2’s latests drama ‘Descendants of the Sun.’ But if you are still hesitating as to whether or not you should give this drama a chance, I am here to clear up your doubts.

Here are 11 reasons why you should start watching ‘Descendants of the Sun’ right now!

Song Joong Ki alone is a good reason to watch the drama. ‘Descendants of the Sun’ is his comeback drama after he completed his mandatory military service in May 2015. He takes the role of captain Yoo Shi Jin who leads his team of the Special Warfare Command Unit into the dangerous territory of Urk.

And one more gif that may help you make up your mind:

Song Hye Kyo is another gem of this drama. She takes the role of Kang Mo Yeon, a bright and sassy surgeon who was dispatched to the fictional war-torn country of Urk to care for the soldiers and civils. Unlike what you have may seen on other dramas, she is not a nonsense professional but rather a clear-headed doctor who knows what her duty is. Also – BIG plus for great English skills!

The drama revolves around the leader of a peacekeeping unit who falls in love with a surgeon as they work together on disaster-relief missions. Script for ‘Descendants of the Sun’ was written by Kim Eun Sook who stands behind other hit dramas, including ‘The Heirs,’ ‘A Gentleman’s Dignity,’ ‘Secret Garden,’ and more.

You don’t have to be a military junkie to appreciate the beauty of military uniforms. Adding handsome, well-bulit men to it gives us an eye-candy like you have never experienced before. 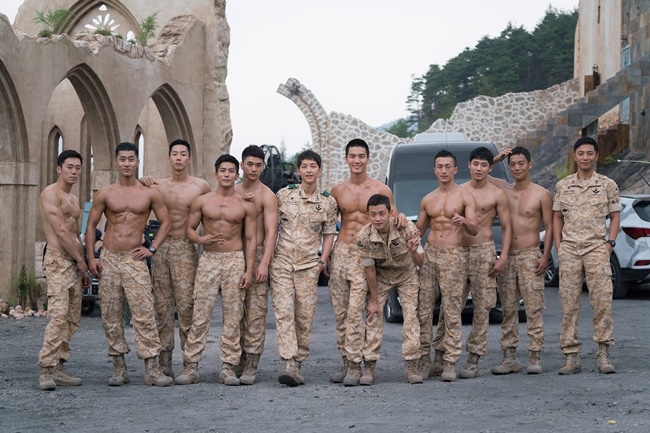 Good drama usually comes with a good soundtrack. ‘Descendants of the Sun’ is no exception. Three songs for the drama’s soundtrack were released so far: Yoon Mi Rae’s ‘Always,’ ‘EXO’s Chen feat. Punch’s ‘Everytime,’ and Davichi’s ‘This Love.’

I know how cliché can love story be in Korean dramas, but let me assure you that ‘Descedants of the Sun’ is a breath of fresh air. You will not see the main couple hating each other in the beginning just to (predictably) fall in love in the end. When Yoo Shi Jin and Kang Mo Yeon (played by Song Hye Kyo) have their first encounter, we can already see some fireworks. It’s a very rare experience to see a (mutual) love at first sight in a Korean drama! Of course, there are some misunderstandings between them in the beginning, but they are quickly resolved.

I mean, I want someone who would look at me the way Song Joong Ki looks at Song Hye Kyo!

The drama was partially filmed in Greece in Zakynthos, Arachova and Lemnos. It is nice to take a break from a concrete jungle to see more natural scenery surrounded by mountains, beautiful beaches and turquoise sea. 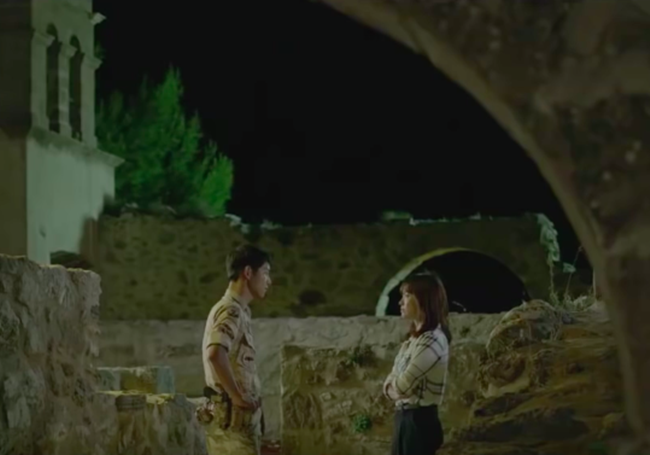 The production team of ‘Descendants of the Sun’ has previously assured viewers that the bromance between the characters played by Song Joong Ki and Jin Goo will be as strong as any romance in the drama. And seeing how strong the romance already is, we can expect to see a lot of scenes of a solid friendship. 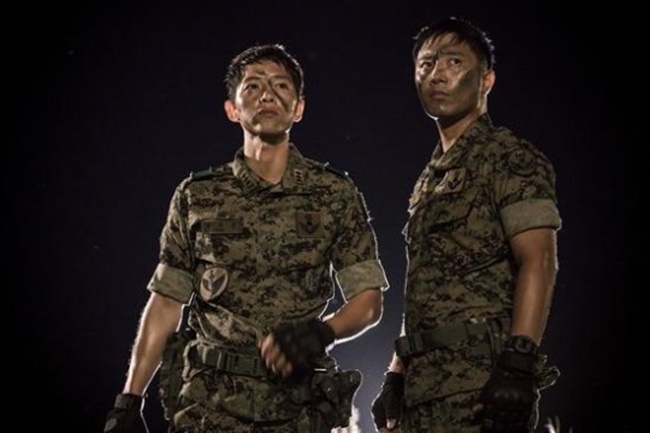 What proves the drama’s impressiveness are the high ratings of over 23.4 percent across all of Korea only after three episodes! If it continues, there is a chance ‘Descendants of the Sun’ will be the highest rated drama of the year.

‘Descendants of the Sun’ is one of the very few Korean dramas to be entirely pre-produced. This means that we can expect the drama to end without unnecessary mid-production controversies that may distract viewers’ attention, just like it was with ‘Cheese in the Trap’ or ‘Queen of Ambition.’

Actor Yoo Ah In is next on the list of cameo appearances on ‘Descendants of the Sun’. It was revealed that he naturally decided to appear on the drama since he is very close with Song Hye Kyo. Even though the exact episode is not yet determined, viewers all over the world are already impatiently looking forward to this handsome actor’s appearance. 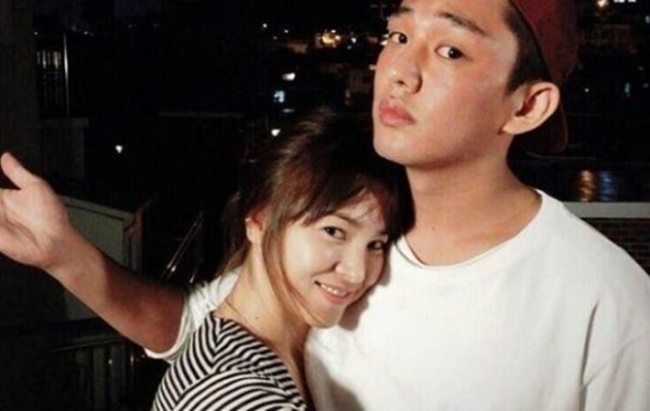 SHINee’s leader is a separate reason for you to watch ‘Descendants of the Sun.’ Onew plays the role of Lee Chi Hoon, first year resident of thoracic surgery. Being kind in nature and good at taking the scoldings of his superiors, Lee Chi Hoon suddenly moves to a war zone where his life is about to turn 180 degrees. It will be interesting to see how his character develops. Also, this is Onew’s first production to air on TV!

‘Descendants of the Sun’ is on its 4th episode out of 16, so it is still not too late to tune in! Catch it on DramaFever and Viki!