It’s May 7th, 2016.   And that only means one thing: the 14th Korean Times Music Festival! Families trickled in with their picnic baskets, kids ran around with candy in their hands, and the men heartily guffawed at inside jokes. It’s 6 p.m,. and the night bursts into a sudden show of fireworks. Han Hee-Jun kicks off the 14th Korea Times Music Festival with a spectacular rendition of the Korean anthem. You can’t help but feel a swell of nationality even if you’re not Korean. 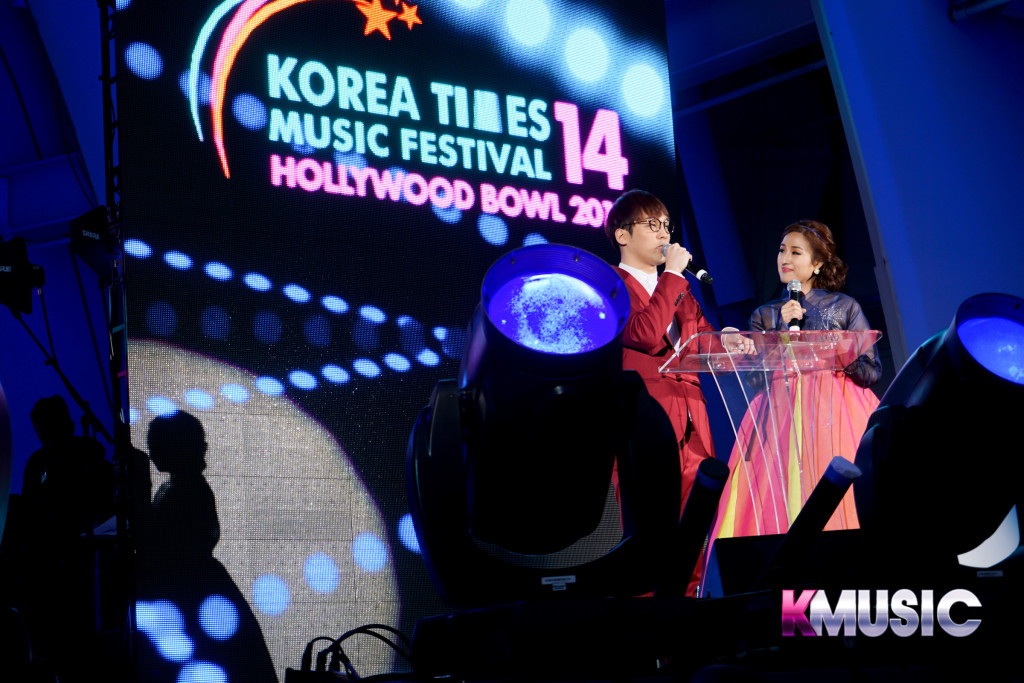 Next up were The Barberettes, a retro doo-wop female trio. Decked out in blue sparkling dresses and hair styles that would put Meghan Trainor to shame, the girls crooned as best as they could before the show was stopped with an unfortunate audio technical difficulty. However, the show soon got off without a hitch with beautiful weather accompanying.

The next singer up was from Korea’s ballad-obsessed days – when original sound tracks dominated the charts while girls gushed over honey-voiced singers, promising passionate love and subsequent heartbreaks. Wax is reminiscent of her glory days, where she won three Golden Disk awards for songs like ‘Fixing My Makeup’, ‘Please’, and ‘Oppa’. It was such a pleasure to see a singer from the early 2000s when the Hallyu wave had not been as strongly dominating the Asian scene as it is now.

As if to continue the trip down memory lane, Lee Ae-ran strutted onto the stage in a giant pink confectionary of a hanbok (traditional Korean dress), armed with finger hearts, and proceeded to sing songs of glory from our grandparents’ generation. ‘Life of Hundred-Years’ suddenly becomes more patriotic as the elder generation starts to sing along to the sampling of ‘Arirang’. And if you were Korean, you knew ‘Arirang’ no ifs, ands, or buts. 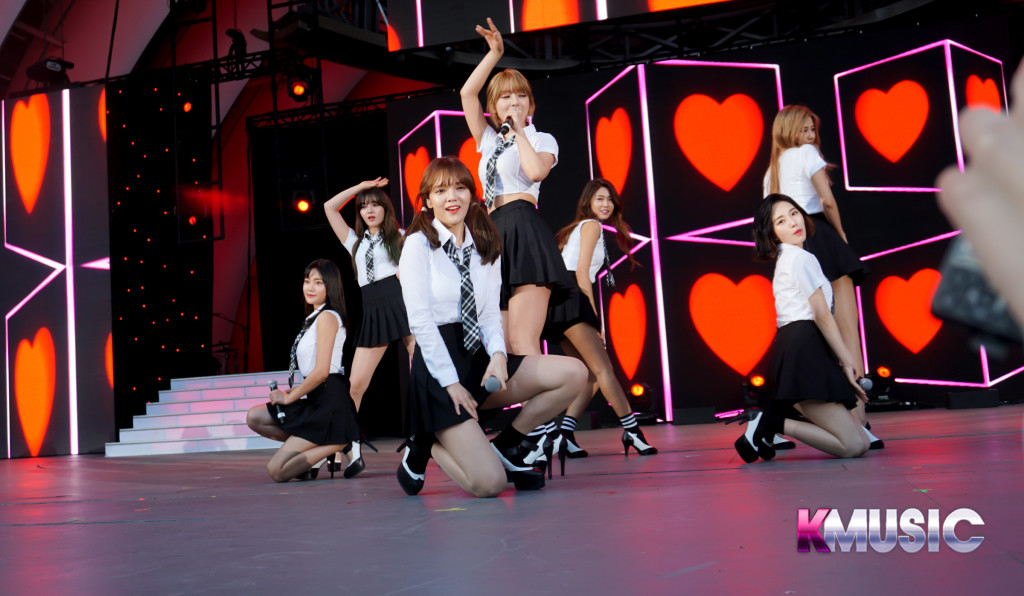 You knew the next act was a girl group when the guys in the audience starts to crane their necks a little harder, and even MC Hee-jun is rushing through his lines. It was AOA, supreme girl group of slightly-so provocative dances. The girls were in town earlier to shoot concepts for their upcoming comeback, and if their new hairstyles were indicative of anything to come, you better prepare your heart. It sure won’t just be an attack this time. AOA turned it up with classics like ‘Heart Attack’, ‘Like a Cat’, and ‘Miniskirt’. I didn’t even know there were that many males in the audience till Seolhyun showed up! 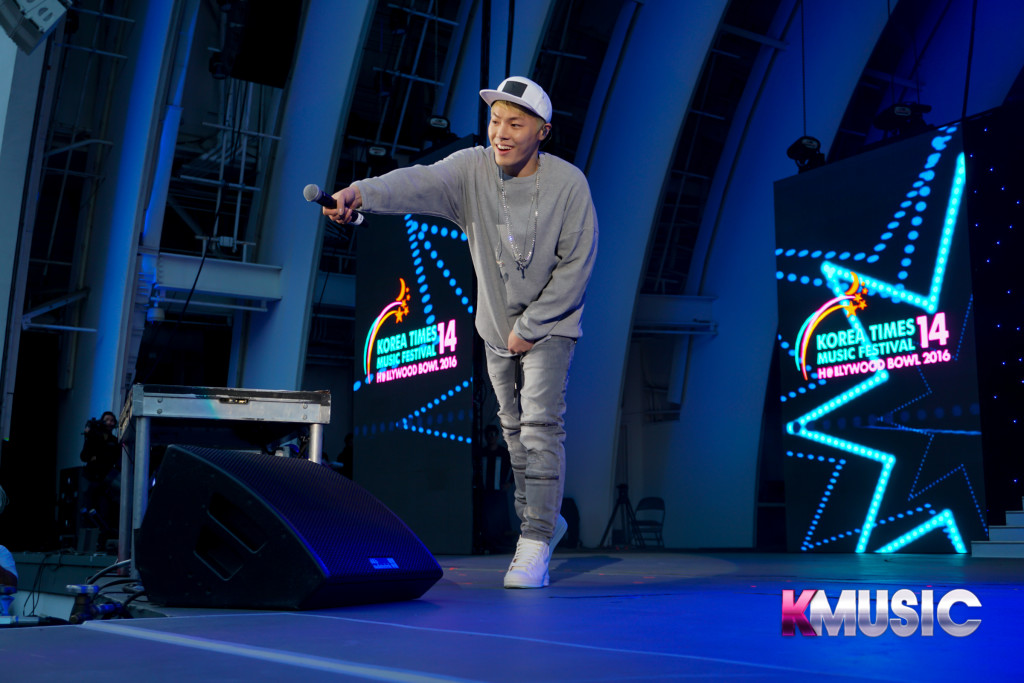 Wheesung steps to the stage, and this was the rare moment we all didn’t know we were waiting for. As one of the forefathers of Korean RnB, Wheesung is the idol of your idols. In fact, your bias has probably covered his songs at one point, if not grew up karaoking to him. Perhaps he’s better known as Jonghyun’s role model and the mentor of Ailee, but his feats in the music industry cannot be ignored. In a delectable turn of fate, I never thought I would be able to hear ‘Insomnia’, but the moment the first chord struck, I knew I struck gold. To hear his dolphin notes in all its live power induces goosebumps that I thought I was storing for SHINee. He particularly had a group of hardcore fans that chanted along to his songs that he joked knew the song better than he did.

Next was Shin Young-ok, a classically trained soprano. Shin graduated from Julliard school with a bachelor’s and master’s in music. I have never heard opera before and judging from the crowd’s hushed, almost reverent tones, they have not either. When Shin trilled a long, hauntingly-beautiful high note, the silence before the thunderous applause was deafening.

An unexpected singer of the night came in the exposed chest of Miljenko Matijevic. Perhaps matching Shin in pure vocal power, Matijevic unleashes full rock power. The great thing? He sings in perfect Korean. It is impressive that he can sing not one, but two songs in full Korean while projecting the necessary emotions to accompany the pieces. 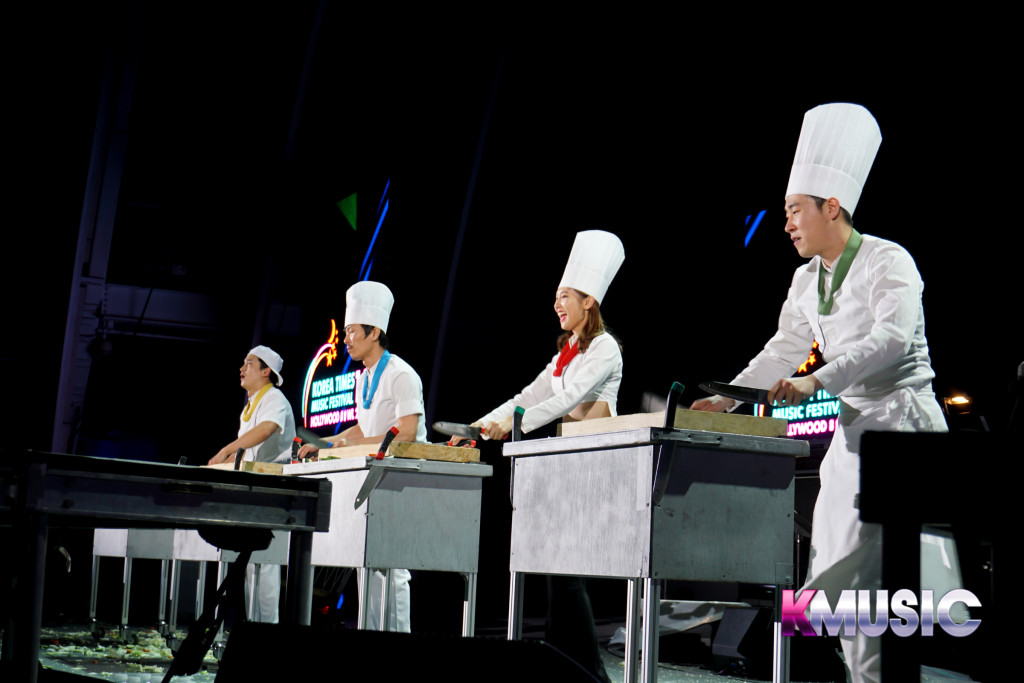 In Korea, NANTA is a very popular show, running for over 18 years. As a non-verbal comedy show, it incorporates elements of traditional samul nori as the story takes off in the form of a kitchen staff preparing for a wedding banquet. Replete with audience participation and the glorious show of chiseled abs and glistening arms, no wonder why NANTA is Korea’s longest running show. The cast had the audience of all ages grasping their stomachs with laughter one moment or gasping at the nifty knife tricks. 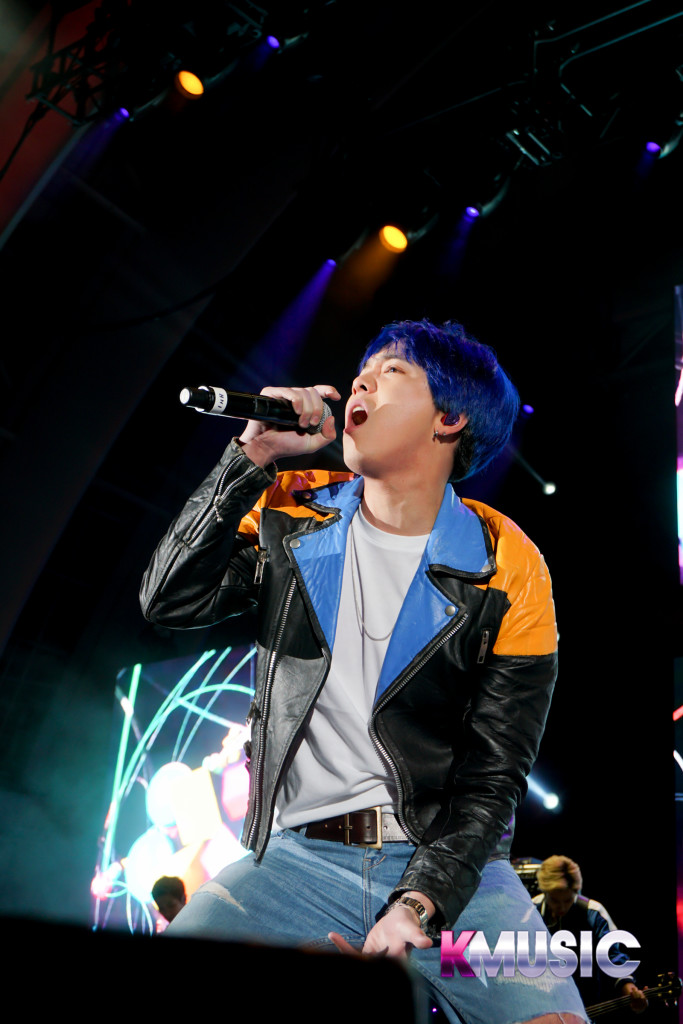 The next act was F.T. Island. Before we knew it, a shocking electric blue-haired, leather-clad Hongki burst onto the stage with an angry rendition of ‘Black Chocolate’. They proceeded to perform ‘To the Light’ and ‘Pray’, which showed off the band’s raw power. 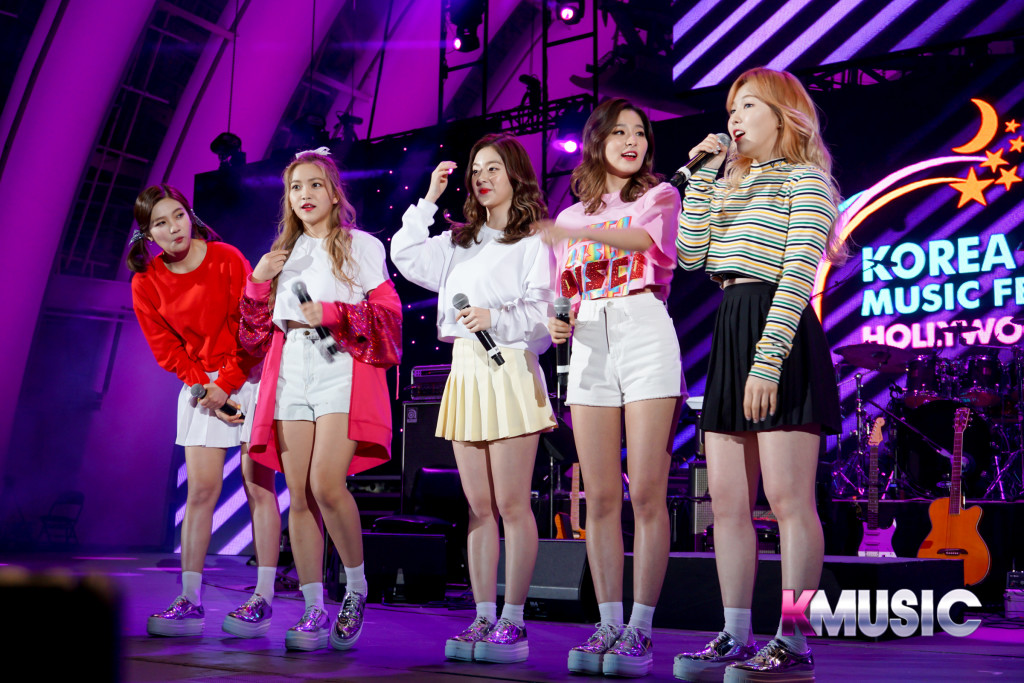 Once again, the stirring of the males in our audience alerted the crowd to the oncoming girl group. This time it was Red Velvet, SM’s prized girl group. Adorned in silver platform shoes and complementary outfits, the girls danced and sang with unbridled enthusiasm to ‘Dumb Dumb’. In between song sets, the girls introduced themselves in English, and Wendy earned herself the loudest cheers in her native language. ‘Happiness’ and ‘Ice Cream Cake’ were next on the setlist. 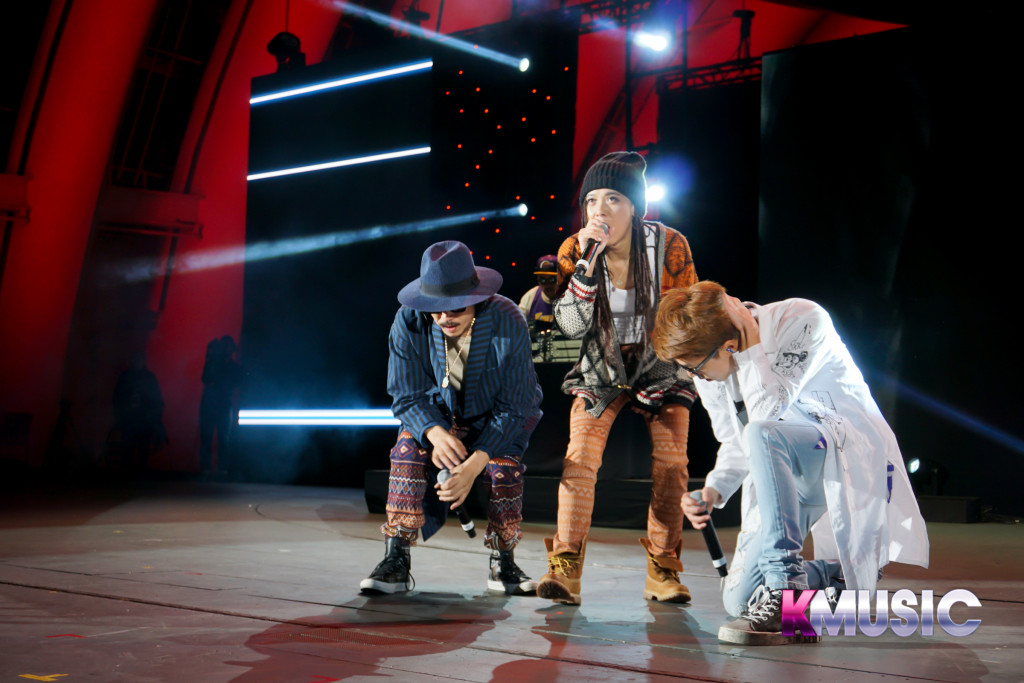 The next act is a heavyweight in the Korean music industry. You can thank Tiger JK for much of your idol rappers, and Yoon Mirae for empowering females with a voice in the male-dominated industry. Soon, MFBTY (Tiger JK, Yoon Mirae, and Bizzy) walked across the stage with more swag than they even knew they were exuding. You can definitely tell from the energy of the crowd that this was how you were to enjoy hip hop. Yoon Mirae barely broke a sweat, spitting out verses like she was just exhaling. It wasn’t until ‘Monste’r came up that they brought the crowd to a whole new level. ‘Monster’ was the song that Tiger JK brought to the table when he was part of Drunken Tiger, and even to this day, the sheer power of it continues to amaze. 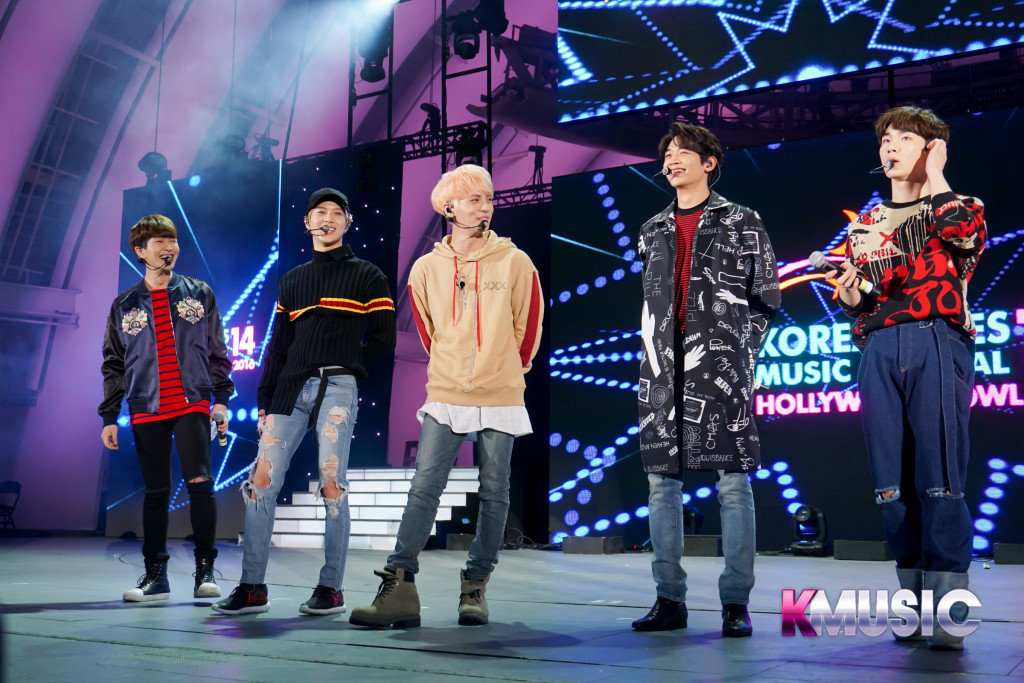 And without further ado, SHINee was the last to perform. To say the cheers went up a few octaves is an understatement. They started the set with ‘Sherlock’ – pairing intense choreography with pitch-perfect vocals. When it was time for introductions, Key was the most impressive in his fluent mastery of English language while the rest of the members held their own. They then winded down with a sweet rendition of ‘Aside’ from their ‘Dream Girl: Misconception of You’ album. And to add the cherry to a perfect top, SHINee nailed ‘View’ in a way that made you wonder how many endless hours of practice these boys poured into their craft to meld the dance and the singing into one perfect symphony. These boys need their own concert tour, and judging from the audience’s roars and cheers, they thought so too. 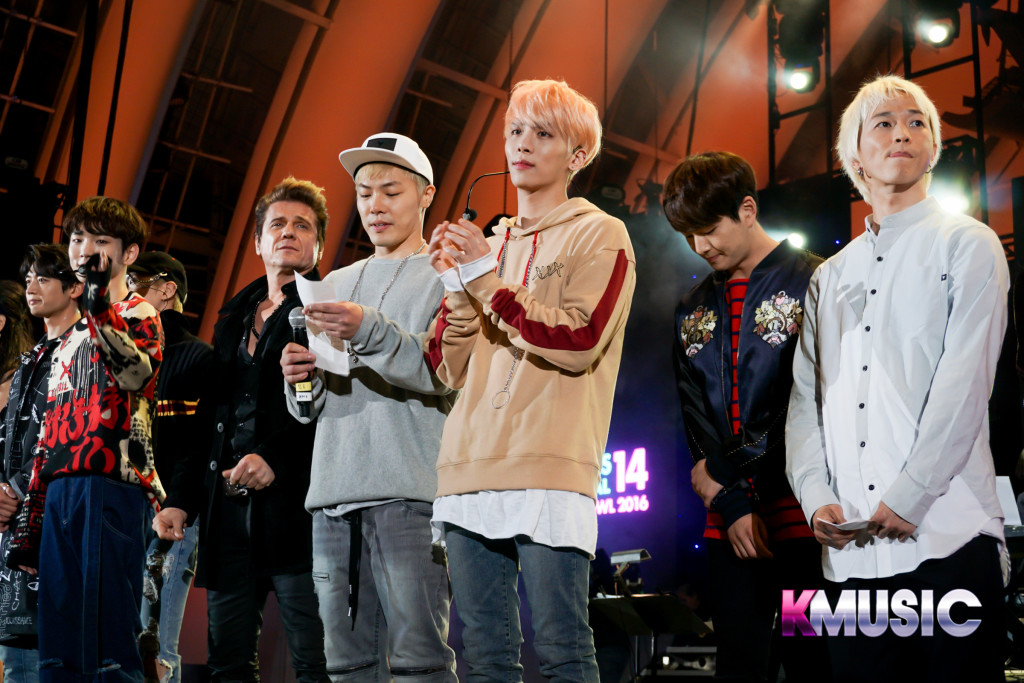 Korea Times Music Festival, more famously known as KMF, sets itself apart from other Korean concerts in that it offers a carefully collected ensemble of performers. Whether it is to show the pervasive nature of Hallyu in the form of Miljenko Matijevic or down to the hard-hitting verses of MFBTY, KMF has set out to show all sides of Korean music. It is refreshing to see this concert as a tradition for many families of Los Angeles. From music grandparents grew up listening to down to idol songs that the kids memorized (and even secretly danced to), there was a song and a performance for everyone in the audience. KMF is one concert not to be missed.

Article and photos by: Jacklyn Yeung