2NE1 is making the most of their trip in the Big Apple! The YG girl group is in the city for their recent nomination for MTV’s ‘Best New Band in the World‘, where they will be performing live in Times Square. The ‘Baddest Female’, CL has been seen round and about, rubbing elbows with some of the cities elite as well as some of the hottest entertainers in the US; including rappers such as M.I.A and Nicki Minaj, and music producer Pharrell. The 2NE1 leader also attend the city’s hottest event, its bi-annual fashion week to show some support to friend and designer Jeremy Scott.

The YG artist is most definitely making waves from having  taking  a few photos with style icon, Ian Conner, partying on the roof with famed fashion photographer Terry Richardson. She even worked on a piece with contemporary artist Daniel Arsham. On September 19, 2013 the “Do you Love me” rapper then met up with radio-personality and hip-hop industry pro Minya Oh aka Miss Info. The two  shot a few pictures together with the hottest food trend right now ‘Cronuts’ (half donut, half croissant) and uploaded them separately onto their Instagram accounts with the following caption:“Breakfast w/ the #TheBaddestFemale @Chaelin_CL! That’s how #Koreans do; ) Happy #Chuseok #cronuts!” 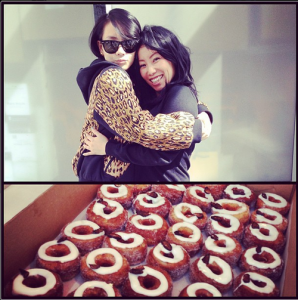 Even if its too early to early to tell, somewhere along the line whether in months or years we can be expecting a “BlackJack” take over especially with all the connections she made recently like with web designer Heron Preston. If it is safe to say for a possible take over of the American pop charts it will most likely be a smooth transaction.