2PM’s Wooyoung grants us an image teaser for ‘It’s the Same!’

2PM’s Wooyoung grants us an image teaser for ‘It’s the Same!’

2PM’s Wooyoung has dropped an image teaser for his upcoming solo track, ‘It’s the Same.’

‘It’s the Same’ is composed and written by Wooyoung himself; it will be a ballad about how life goes on, even when you are missing your ex. Check out the image below, which features Wooyoung staring up at the daylight sky, in the midst of what appears to be a wooded forest. 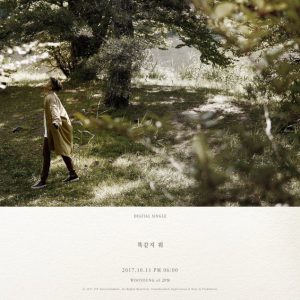 The song will drop on the 11th of October at 6pm KST. It will be released alongside the Japanese version, which will be titled ‘Still I…’

According to Wooyoung‘s agency, JYP Entertainment, they decided to release both versions together to say thank you to the fans that have endlessly supported and cheered on Wooyoung‘s activities.

We can’t wait to hear the song! How about you?