2PM’s Concert in the Philippines was the HOTTEST!

2PM’s Concert in the Philippines was the HOTTEST!

The hunky six-member group of 2PM that are composed of Jun K., Nichkhun, Taecyeon, Wooyoung, Junho and Chansung filled the arena with their hotness!

Even though there are some empty seats, Filipino Hottests welcomed 2PM with deafening screams that filled the whole arena of the Mall of Asia. The group also captivated the audience with their singing, amazing dance moves and their attractive smiles.

There were some technical glitches too that spoiled their first three songs, but  2PM looked unfazed and warmly greeted their fans.

Nichkhun has been to Manila before but it was the first time for the other members to be in the Philippines. 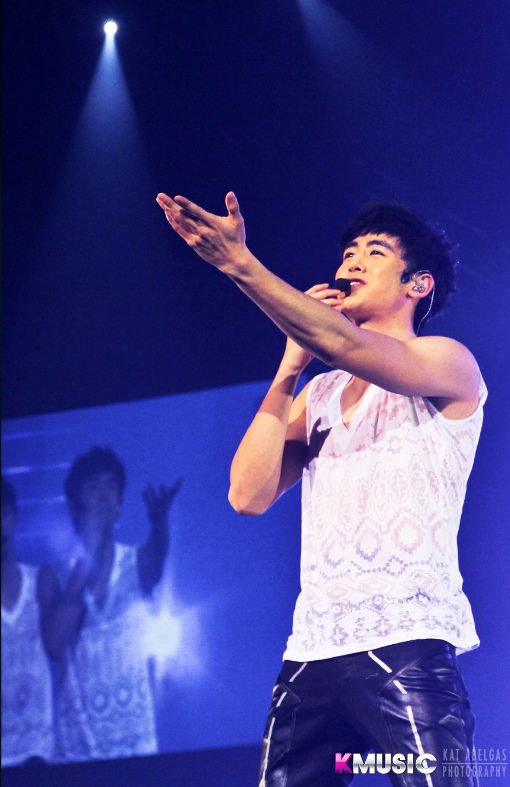 They performed a lot of songs; some songs were from their first album up to their latest songs. These songs that they sang and/or performed were “I’ll Be Back” with the boys in their black and silver outfits, and the pyrotechnics went off around the stage. “Heartbeat” and “Again and Again” was sung by the boys who really knew how to tease their female fans, showing them glimpses of their abs during their performances.

“Back 2 U” and “Like a Movie” together with their female back-up dancers; the boys also rocked the arena with their upbeat songs like “Without You”, “Don’t Stop Can’t Stop”, “HOT” and “10 Out of 10.” they also showed their romantic side by singing ballad songs such as “I Can’t” and “Only You,” and by the time the boys performed “Hands Up”, the crowd was dancing, jumping and screaming for more. 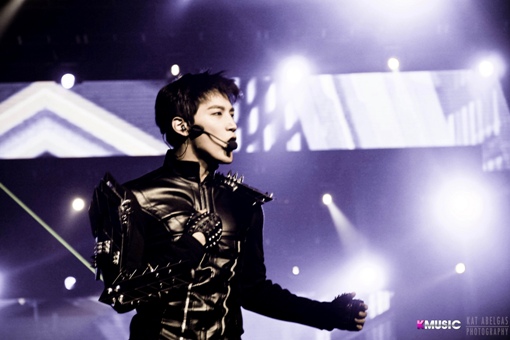 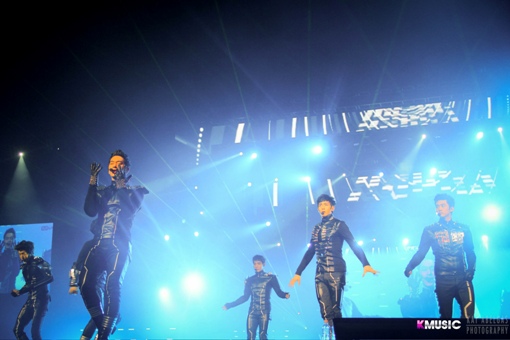 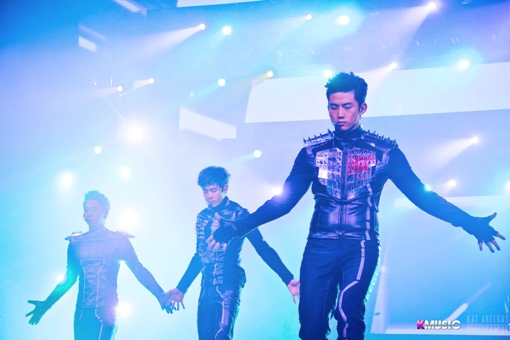 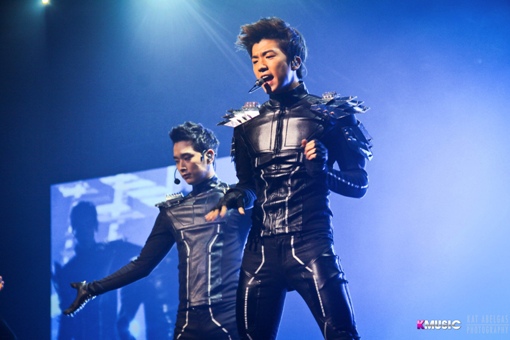 The members of 2PM also prepared a solo performance. Chansung who is the youngest of the group, sang “Love You Down” proving to his fans that he also knows how to do some sexy dance moves and even ripped off his shirt at the end. Junho sang and dance to “Just a Feeling” but that’s not all, he also played the drums. 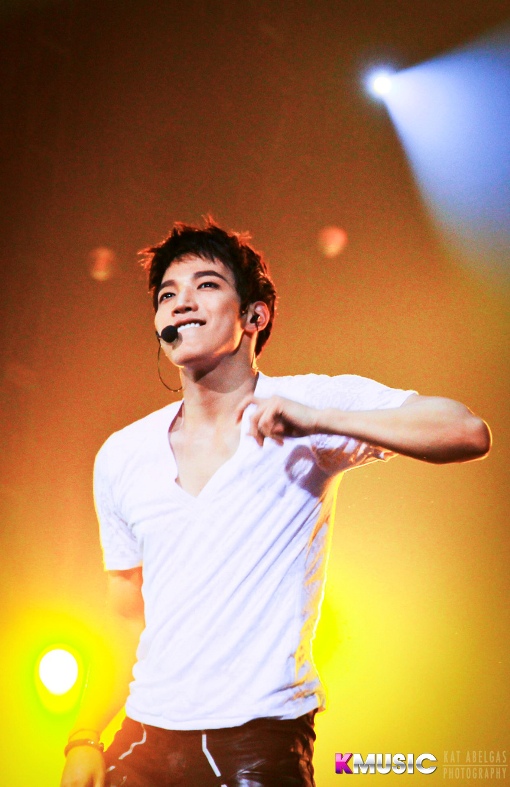 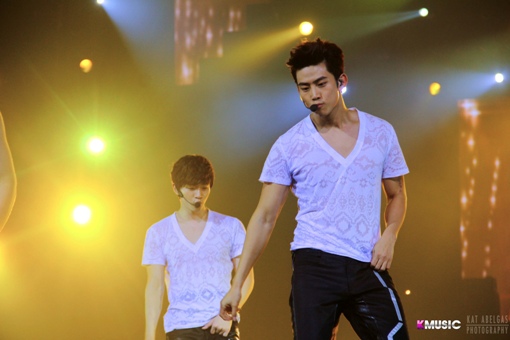 The boys even prepared a special video “2PM Proposal” which was shown during the concert. In the video, they prepared a “special proposal” for their fans, giving them cakes and stuffed toys, just like what a boyfriend would do for his girlfriend.

The fans were surprised that Wooyoung was singing one of the Tagalog children’s song “Tong, Tong, Pakitong Kitong”, and since he didn’t really know the lyrics, he had to ask the audience to sing along with him. Isn’t he cute? 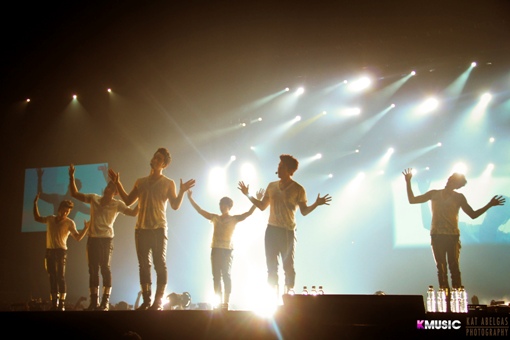 Since Taecyeon and Nichkhun were the most fluent in English, the other members also made an effort to speak a few words of English and even in Filipino. They also joked around with some Filipino phrases and words like “gutom ako” (I am hungry), “guapo” (handsome) and “mahal kita” (I love you).

It can clearly be seen in their faces that the boys of 2PM enjoyed being on stage and the interaction with their fans. Some members were even spotted grabbing fans’ cameras and iPad, and taking photos with them. Aren’t they so lucky?

Before the concert ended, the members said something to the fans. 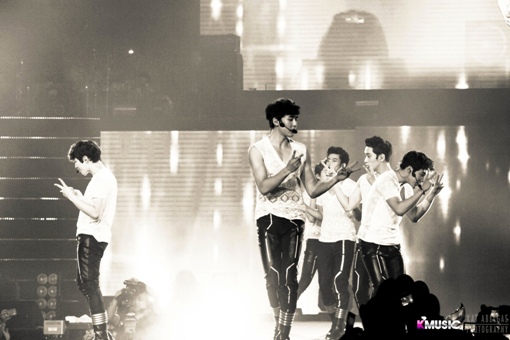 “I want to thank you guys for the love and support. Tonight was mind-blasting, one level above mind-blowing.” Nichkhun said.

“This year we are going to make a comeback. We will be back with a brand new concert,”  Taecyeon said, and even flattered the crowd that Manila was “the hottest” in their “What Time Is It 2PM Live Tour” so far.

“We can’t forget your love. We will be back soon. Mahal kita. Salamat po (We love you. Thank you),” Wooyoung said.

After nearly 2 hours and a half on stage, 2PM finally said their goodbyes, with a promise that they’ll be back soon with a new album.