2PM’s Taecyeon To Join The Growing List of Idols Enlisting

2PM’s Taecyeon has spoken of his plans to enlist soon.  He made the comments during the group’s recent ‘6 NIGHTS’ concert in Seoul.

During the show on June 11, Taecyeon said, “I’m currently shooting OCN‘s drama ‘Save Me’.” He added, “I think it will air after I enlist.  Please watch it if you miss me.”

OCN’s drama ‘Save Me’ is currently scheduled to air in August.  Taecyeon plays the role of a young man who feels pressured due to his status as the son of a governor.

Taecyeon has previously stated on television show that he plans to enlist in the army this summer.  His enlistment has gained a lot of attention as he gave up his American permanent resident status and underwent back surgery in order to enlist and serve as an active duty soldier. 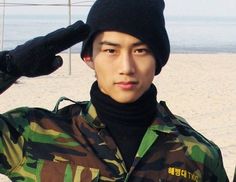 What do you think of Taecyeon’s enlistment?  Are you going to miss him?

Keep up to date with all the news from the world of K-pop with Officially Kmusic.