The 91 line continues growing, and a recent photo of them has been shared!

The 91-line in K-pop began with Nicole and Key and gradually spread to other idol groups. As time goes on, even if some members of the line are not present, new members make up for it!

Backstage of ‘Incheon Korean Music Wave 2013,’ some 91ers gathered to share a photo. miss A member Min shared the selca with the caption,  “Not everyone came out well.” Those spotted in the photo are Min herself, KARA member Nicole, F.T. Island member Jaejin, 2AM‘s Jinwoon, and Soyu of SISTAR.

Those confused, Soyu was born in February of 1992, which makes her an ‘early 92’ and easily considered a 91’er.

Fans commented, “They’re the closest group in K-pop,” “Where’s Key, Mir, and Dongwoon?” and “They all look so cute!” 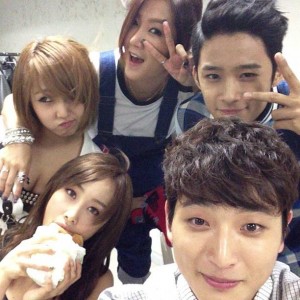