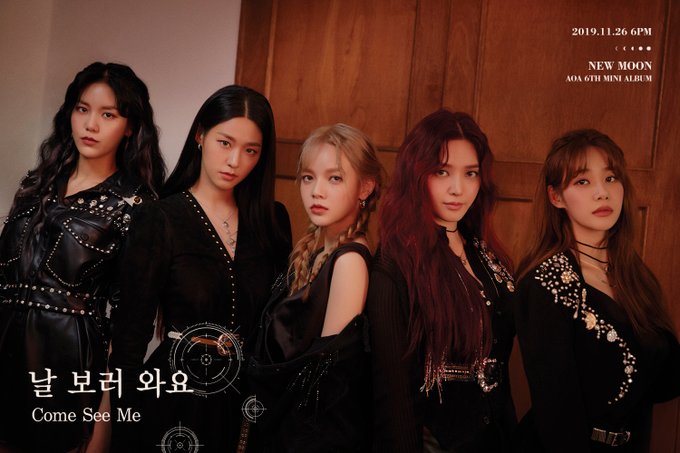 AOA have officially announced their comeback with ‘New Moon’ with two teaser images.

The girl group will be coming back with their sixth mini album and title track ‘Come See Me‘ on the 26th.

Check out both images below!

The first poster is titled ‘Aiming at MOON‘ and the AOA members are dressed in black. They stand in front of a wooden door and the lighting gives off a warmer vibe contrary to the members’ cold gazes. Yuna‘s outfit is decorated with lots of silver accessories, possibly relating back to the concept of the moon.

While the first poster came off as somewhat classy, the second poster is more hip. Seolhyun wears a patterned vest while Jimin has what looks like a bandana around her head. Hyejeong dons a chic jacket and wide pants giving off a tougher image. Chanmi‘s bright red hair can be seen clearer in the second poster.

After AOA‘s appearance on ‘Queendom‘, are you excited for their comeback? Tell us in the comments below!

Scroll for more
Tap
EXO kick off individual teasers for ‘Obsession’ with Kai!
Kang Daniel will be releasing a digital single soon!
Scroll