Are You Ready For The Stage Of A Lifetime At The 2015 MAMAs?

Are You Ready For The Stage Of A Lifetime At The 2015 MAMAs?

The Mnet Asian Music Awards, or also known as the MAMAs, have been a hot topic this year due to the controversial nominations in certain categories, and most of the line-up only being YG Entertainment artists.

Now, the final line-up has been released and much to the relief of fans of other companies, a lot of big names have joined the itinerary for the performance stages.

Mnet M Countdown has taken to their MAMA Twitter and to their Facebook to do exactly what their name says: countdown the 30 days to one of the biggest awards ceremonies in the Korean music industry. Taking place in Hong Kong, China, the awards are celebrating their 16th anniversary and bringing some of the biggest names in the business to enjoy it with them.

The first round of the line-up was announced on October 28th with BTS, Zion T., GOT7, and CNBlue (though CNBlue is slotted to perform a concert in Japan on December 3rd, and was not included in the picture of the final line-up for the MAMAs).

On November 17th, the second portion of the line-up was announced as the following performers joining the previously mentioned line-up. PSY and CL are doing a special comeback and debut stage, while f(x) is teaming up with international artists, Pet Shop Boys, for a never-before-seen stage, Big Bang and iKON are joining their label mates for their own stages, and JYP, himself, is set to appear as well. 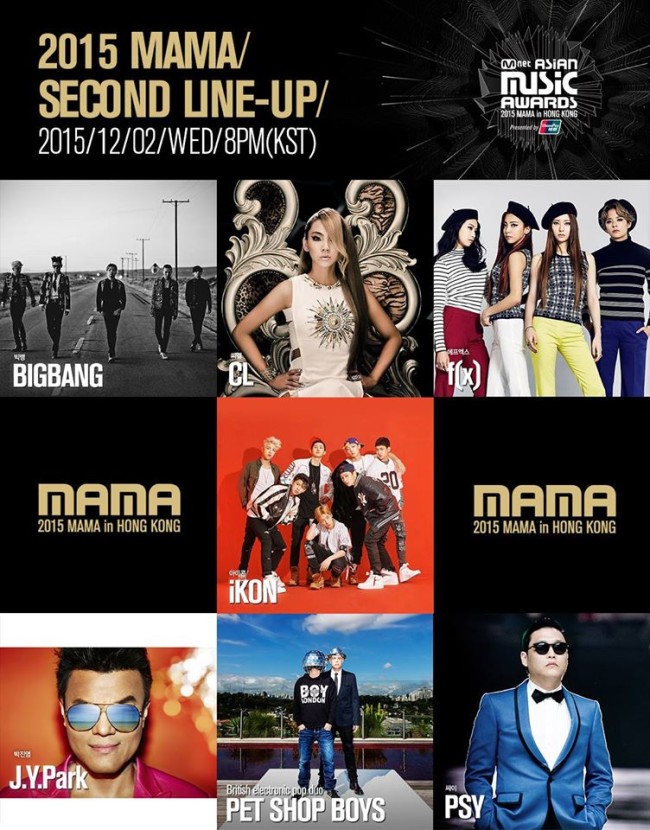 For the last round, it was announced on November 27th, with much to the excitement to SM Entertainment fans everywhere (there were speculations that SM would not be sending anyone more to the MAMAs this year), that EXO, SHINee, and TaeYeon would be joining the official line-up. You can also see that San E, HyunA, and Jessi are also joining this already amazing list of performers to take this award ceremony to the top!

As an added bonus, GOT7, and rookie nomination groups, Monsta X and Seventeen, would be doing special performances at the Red Carpet Event before the award ceremony commenced. It is not confirmed if they will also be performing on the main stage. 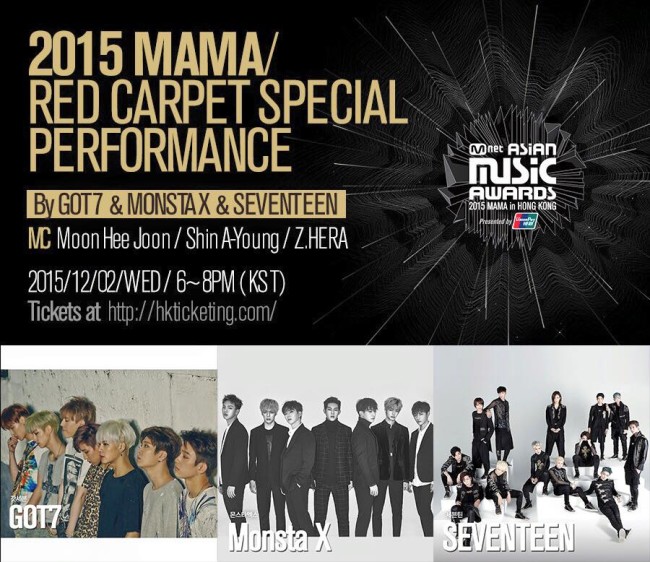 The Mnet Asian Music Awards are scheduled for 8 pm to 12 am on December 2nd with the red carpet taking place from 6 pm to 8 pm just before the ceremony. You can actually watch the awards live on the official website or KCON has announced you can always watch them on KCON.tv as well.

I plan on watching them that night, well, morning for me. Are you going to? Tell us who you are excited for the most.