The Art & Symbolism Of Ladies Code “The Rain” Music Video

The Art & Symbolism Of Ladies Code “The Rain” Music Video

This is how my friend described the recent music videos of Ladies Code, the ones where they are a trio. For those who are unfamiliar with the history of this unique group, I would suggest you check this YouTube video which, in my opinion, does a really good job on reviewing the history of the group until their first single, ‘Galaxy‘, which was their first single as a trio:

If you find any mistakes, you can leave a comment and the up-loader promises to fix it.

Dancing in The Deadly Rain

Whether you listen to the song’s lyrics or look at the variety of images that appear in the video, it seems rain is used as a metaphor for a rather negative thing- something that might hurt one’s soul or heart, something that causes a lot of pain. Therefore, we can see the members using various methods to avoid the rain, from umbrellas to nylon bags, along with sad/worried looks when being “hit” by the rain. At the end of the video there is a huge twist regarding the umbrellas and their function of protecting one from the rain. However, I will get to it later on.

From the very beginning, the video gives a strange feeling. We hear piano sounds yet all we see is one of the members (probably Ashley) sitting motionless in front of the piano, while she lays her head on it. The scene’s lighting is quite dark so it’s hard to see the face of the member and there is a strong impression that she might be dead. 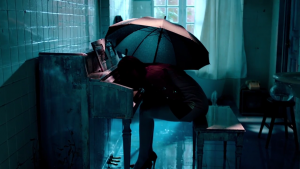 In the video, we see the members with beautiful outfits and rather graceful dance moves. However, disturbing images will keep haunting us throughout; whether it is the dying fish or the mirrors that are breaking.  Broken mirrors usually symbolize bad luck or a sign for a dark future to come. The breaking glasses don’t help to ease the already troubling atmosphere either. However, due to the editing of the video, it seems that the disturbing images manage to blend well with the dancing and more pleasant elements of the song and music video. It’s like one big “package” full of beautiful things, along with dark and disturbing ones.

One can say that this “package” symbolizes Ladies Code in the present. They are still beautiful idols who can dance, sing and look pretty. However, due to their tragedy when they lost 2 of their members, they are not what they used to be. Death (or rather mourning the dead) is on their mind as well, and fear too. Despite that, they are still idols, even if slightly darker ones.

The Final Scene: Where The “Shield” Becomes The “Arrows”

In the final scene, member Zuny can be seen holding the umbrella while standing in front of a beach. At the same time, something that looks like a “rain of umbrellas” can be seen.  Many umbrellas, that matches Zuny’s umbrella, are falling from the sky in a similar manner to rain drops.  This scene seems important since this is the last thing that we get to see in the video. I will offer my interpretation to this scene. It might sound a bit disputed so feel free to disagree and offer your own ideas. 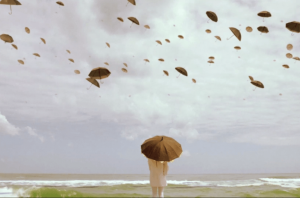 I will suggest that the umbrella symbolizes Polaris Entertainment, Ladies Code’s company. Why? Umbrellas are made to protect us from the rain. This is their role or “job”. Yet in the video, they turn to rain- the very thing they are supposed to protect from. In addition, all the umbrellas look the same, as if there is almost no difference between Zuny’s umbrella and the other umbrellas that are about to fall down on her.  It’s like having a shield that protects you from harmful arrows yet suddenly many shields are falling down from the sky. In a way, the company’s role is, among other things, to ensure the idols safety and well being- to protect them like the umbrella is protecting us from the rain. With Ladies Code’s tragic accident, the company failed to do their job since their manger, the company’s representative, drove too fast due to busy schedule, leading to the terrible accident that caused a disaster. The company, who is supposed to protect their idols from danger, caused them a great deal of damage. 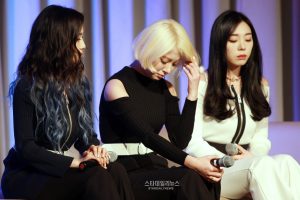 I think that by giving the music video’s director artistic freedom, Polaris Entertainment allowed this kind of criticism to be expressed. This might be the company’s way to apologize both to the fans and the remaining members of Ladies Code- a rather bold act, in my opinion.

‘No Smiling To The Camera Please’ & A Dark Pearl Is Born

It’s not just the last video. Their previous videos for the song “Galaxy” also contain disturbing themes along with graceful ones. In the ‘Mystery‘ album photo book, there is a picture with the sentence “Here glows the dark universe“. In both ‘Mystery’ and ‘Stranger‘ album photo books there is not a single picture where the girls smile. Compared to their previous albums, the ones before the accident, you could see them smiling and even laughing at times. The tragedy doesn’t only affect their music and videos but also the visual style of their albums’ feel. 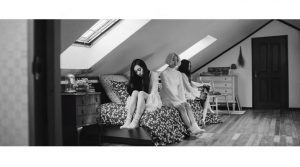 Even if Ladies code did try darker concepts in the past, like in the music videos of ‘Hate you‘ and ‘So Wonderful‘, the level of uncertainty is much lower. The feeling that you don’t know what is about to happen is not really there and the symbolism seems to be less complicated.
Their older music videos are much more cute, cheerful and bright with more smiles and laughs. It’s the same when you compare the style of their older albums’ photo books with the new ones.

The accident obviously had a huge impact on both their lives and music. That presence is heavily felt in their music videos and albums’ photo books as a trio. It seems that in the huge ocean of K-pop, an ocean filled with many groups that sometimes look similar to each other, a new & unique “Dark Pearl” has been created. While the circumstances of its creation are very sad and tragic, this “Dark Pearl” is surely magnificent and interesting to watch.