ATEEZ drop track list for ‘TREASURE EP.FIN : All To Action’

ATEEZ drop track list for ‘TREASURE EP.FIN : All To Action’

Super rookie boy group ATEEZ are on a roll! They will be making their third comeback within a year of their debut on October 8th with ‘TREASURE EP.FIN : All To Action‘. This is presumably the last instalment in their ‘Treasure‘ trilogy following their debut mini album and first and second comebacks. Fans are highly anticipating their comeback after the success of their debut, followed by ‘Say My Name‘ and ‘Wave‘. While ‘Wave‘ and ‘Illusion‘ had a summer and tropical concept, it looks like this comeback will be darker. Check out the track list below! 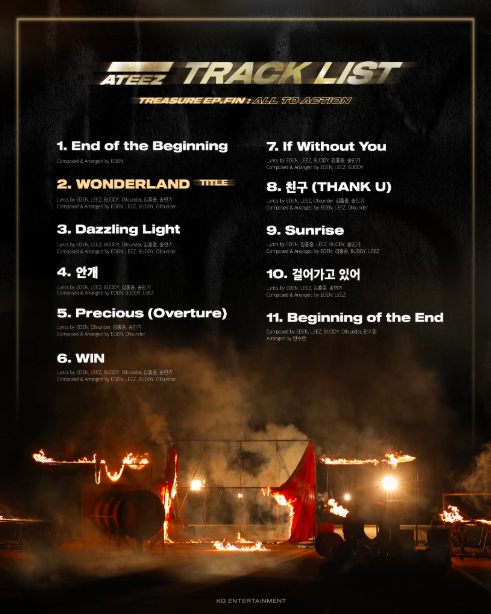 There are 11 tracks in total with ‘WONDERLAND‘ as the title track. The image shows the set burning, which further proves that this comeback will be darker than their summer comeback.

What do you think about ATEEZ‘s track list for ‘TREASURE EP.FIN: All to Action‘? Let us know in the comments below.