B.A.P To Make A Comeback With All 6 Members: Latest Teasers Feature Himchan And Yongguk!

B.A.P To Make A Comeback With All 6 Members: Latest Teasers Feature Himchan And Yongguk!

BABYZ I hope you’re ready, because this comeback is definitely one for the books! B.A.P has dropped their final set of individual teasers. And this time, fans were in for a pleasant surprise when it was revealed that the boys’ comeback ‘ROSE‘ will be including, Yongguk!

Check out the teasers below of Himchan and Yongguk: 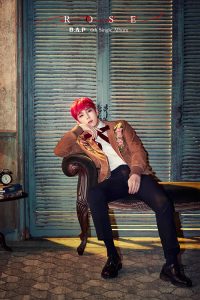 Himchan is sporting really vibrant, red hair, which I definitely love! It’s definitely a good look on him. The eldest member is seen nonchalantly looking into the camera with his handsome gaze. 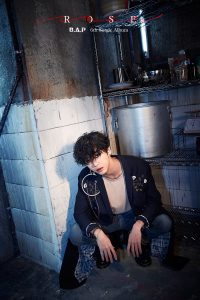 B.A.P’s leader, Yongguk is definitely a sight for sore eyes. The rapper who was previously on a hiatus for health concerns, is sporting a darker look compared to Himchan’s neutral colors. Despite that, Yongguk is looking handsome as ever and is rocking the permed hair too.

Since the release of Yongguk’s individual still, fans were besides themselves at the thought of having the gummy leader come back. Shortly after the final individual teasers were released, TS Entertainment posted on the group’s official Facebook with the below statement confirming the leader’s comeback: 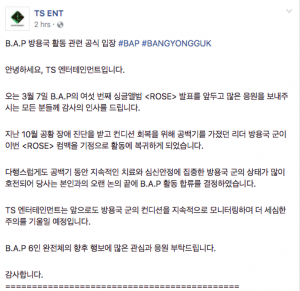 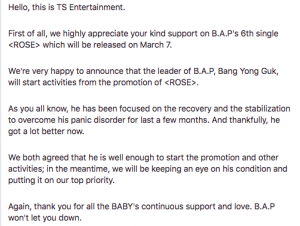 Here’s to hoping that Yongguk has been well rested and is in good health to continue promoting again! Get ready, because all 6 members will be making their comeback on March 3rd with ‘ROSE.’ So be sure to check it out!

What are your thoughts on Yongguk’s return to actively promoting again? Let us know in the comments below!