On March 14th, it was revealed that B.A.P’s Himchan has suffered from a fractured rib. According to TS Entertainment, the member injured himself during the group’s promotions for their recent comeback, ‘ROSE.’ Doctors have stated that the injury stemmed from rapid weight loss and over exertion from practices. Despite, the stress fraction to his rib, the eldest member will continue on with promotions. TS has agreed to abide by his wishes and in order to maintain his health, will be promoting without participating in the choreography.

Check out the official statement from TS Entertainment Below: 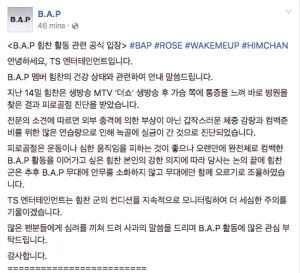 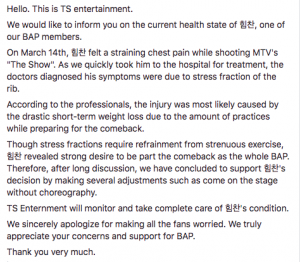 Well wishes to Himchan, and here’s to hoping he gets better soon!