Bang Yongguk has decided to leave B.A.P and TS Entertainment

Bang Yongguk has decided to leave B.A.P and TS Entertainment

The rumours circling B.A.P‘s future, particularly leader and rapper Bang Yongguk, have been put to rest. On August 23rd, TS Entertainment released a statement confirmed Yongguk‘s departure from both the group and the entertainment company. 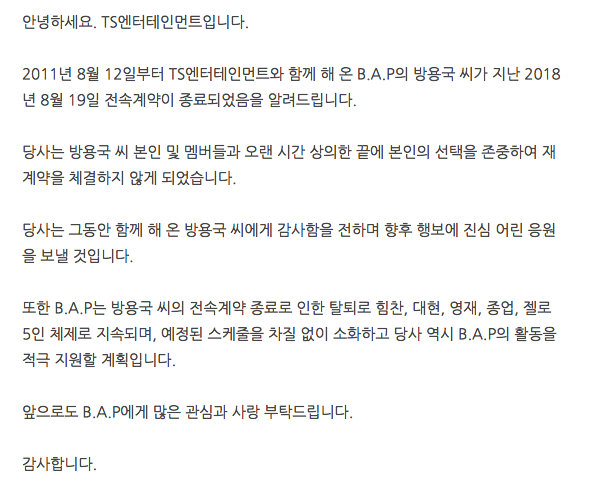 It reads “Hello. It is TS Entertainment. Bang Yongguk of BAP, who has been with TS Entertainment since August 12th, 2011, is announcing that his exclusive contract has expired on August 19th, 2018.

After a long discussion with Bang Yongguk, we have not been able to renew a contract and his members respect his choice.

We would like to express our gratitude to Bang Yongguk who has been together with us for the past seven years and will send our heartfelt support in the future.”

In the statement released, TS Entertainment also assured fans that B.A.P will continue their schedules activities as planned as a five-member group. They ended their announcement with “Please continue to give B.A.P your love and interest in the future. Thank you.”

We share BABY’s sadness about Yongguk‘s departure, and we wish both him and B.A.P the best of luck in their future endeavours.

Officially Kmusic will always keep you updated, so stay tuned!