Block B’s sub-unit, Bastarz, is making this comeback quite memorable with yet another music video. After the 4th wall breaking ‘Selfish and Beautiful Girl‘ and the edgier, ‘Make it Rain,’ ‘That’s Right‘ takes a more light-hearted tone.

The video is made up entirely of self-shot footage of the trio and their traveling adventures. Scenes of them at the airport, beach, and even an amusement park are accompanied with some fun effects and texts. Completely different from their previous music videos, we see the ever fun-loving part of the members that we’ve come to love.

The track itself is just as relaxed and light as the video and makes for an easy listen any day of the week. After the intense sound of ‘Make it Rain,’ Bastarz has really taken a down a notch with this good vibe sound. ‘That’s Right’ also carries a hint of a similar sound to ‘Selfish and Beautiful Girl’ during the chorus. It’s a nice tie-in to relate the tracks even in the slightest. 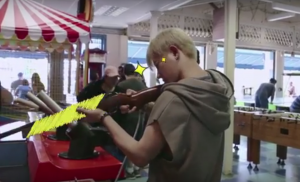 The trio made their first comeback, after debut, with a mini-album, ‘Welcome 2 Bastarz,’ boasting 5 tracks and the aid of R&B singer and producer, Dean. Notably, P.O and B-Bomb played key roles in the production.

This comeback period is far beyond what was originally expected and we’ve gotten to see and hear new things from the sub-unit. Which if of the three music videos were your favorite?

Stay with Officially Kmusic as we bring you more news from the world of Korean Entertainment!