V.I.P‘s I hope you are ready, because BIGBANG is officially making a comeback on December 12th! 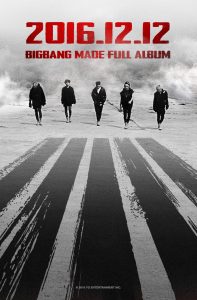 The group previously dropped hints at their comeback by showing teasers of their music video filming in Seoul. However, YG Entertainment has officially confirmed the boys’ comeback, and posted on their official Facebook with the above teaser photo on November 21st. The 3rd full studio album, MADE, will drop on December 12th, 2016 right before T.O.P’s military enlistment.

Follow Officially KMusic as we bring you the latest news in Korean Entertainment!