As their comeback date is rapidly approaching, BIGBANG dropped the first teaser photo for their upcoming title track, ‘FXXK IT.’ The comeback single will be off their 3rd full album, ‘MADE.’ Leader, G-Dragon composed the new song with producers, Teddy and R.Tee. The lyrics were co-written by G-Dragon and fellow member, T.O.P. Teddy and R.Tee contributed to arrangement of the track. The boys will be making their comeback on December 12, 2016 at midnight KST so be sure to check it out! 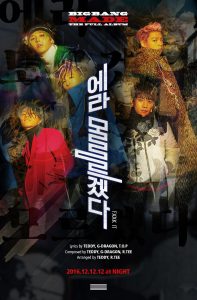 Taeyang also teased fans with an additional photo on his official Instagram. The online release for their album will be on December 12th, while the offline release is on the 23rd. Check out his post below:

Are you excited for BIGBANG’s comeback? Let us know in the comments below!

Follow Officially KMusic for all the latest news in Korean entertainment.