As the summer fever ends and finally, the long wait is over for all the VIPs worldwide as BIGBANG revealed during the NAVER ‘V‘ APP COUNTDOWN LIVE broadcast last August 5 at 12:00 KST two of the last tracks and its music videos for their MADE SERIES album [E], “Let’s Not Fall In Love” and “Zutter“.

This enthralling, emotional, and euphoric pop-ballad song “Let’s Not Fall In Love” music video features all 5 members of BIGBANG, and written by G-Dragon and YG Entertainment‘s very own head producer, Teddy. The beat for this song is really addictive especially reaching the hook as it makes you sway left and right with it. The melody also reminds you of sad song “Blue“, one of BIGBANG’s early songs, that gives you that certain vibe of sadness and longing, but this one is kind of the opposite in the beginning, but wait for its ending though.

VIPs worldwide were already teased through Yang Hyun Suk himself, posting teasers on his personal Instagram account. It’s teaser poster itself speaks a thousand sadness, as they anticipated the music video to be somewhat sad considering the similarity of its poster with ‘If You‘ teaser poster here.

T.O.P.‘s white blonde hair, Taeyang‘s darker hair, along with G-Dragon, Seungri and Daesung‘s aegyo here will surely capture your heart and melt your souls. Set in a mood as if you’re watching a romantic movie with the 5 male leads in their youth.

Brace yourselves for the ultimate fan service the quintet gives you with their mesmerizing gazes and how they share their love for you as if you’re their partner on the video below.

Also check out its dramatic teaser poster below. 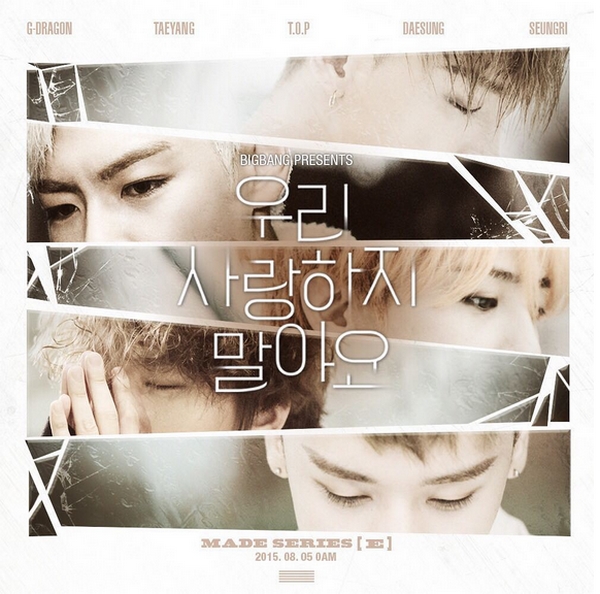 On the other hand, the hip-hop duo project of YG Entertainment, G-Dragon & T.O.P. also released their new track after 5 years, “Zutter” under the same album [E] composed by T.O.P. along with the help of writer-producer Teddy as well.

This time, it’s a more ‘serious’ and ‘action-filled’ kind of music video. And in the music video contains the ‘weird’ and ‘unusual’ posts of T.O.P. on his Instagram account weeks before the actual unveiling of video. The duo on the video were acting extremely crazy on the video as well, showing their funny antics and other things that you somehow don’t ‘picture’ them out to be doing. Contrasting to the sweet and melodious sentimental ballad song ‘Let’s Not Fall In Love’, ‘Zutter’ gives you that ecstatic wild feeling of jumping up and down with its drop beat.

You may also see familiar faces on the video like the comedian  Yoo Byung-Jae that recently joined YG Entertainment and also other artists from YG.

Watch-out for some eerie visuals and insanely funny moments of the fantastic duo in their music video below.

So did you already have that hint when you saw their intriguing teaser poster below? 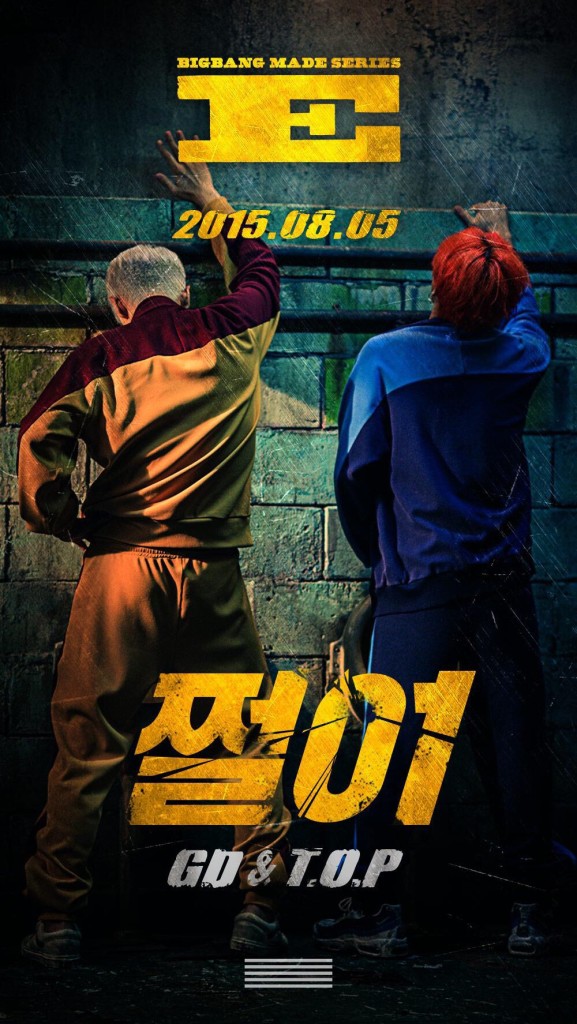 BIGBANG also added two other countdown teaser photos before releasing the actual music videos below, so check them out. 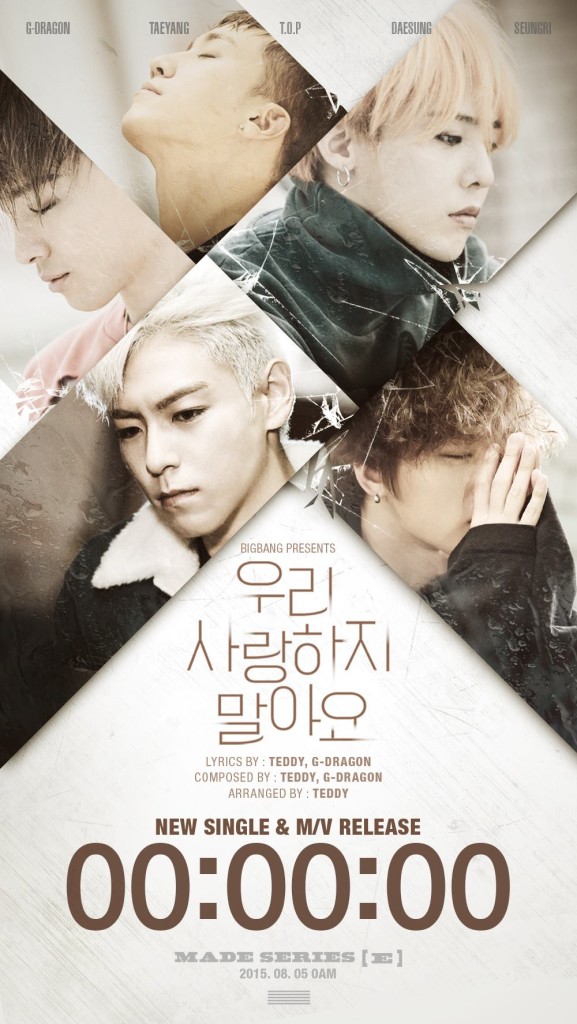 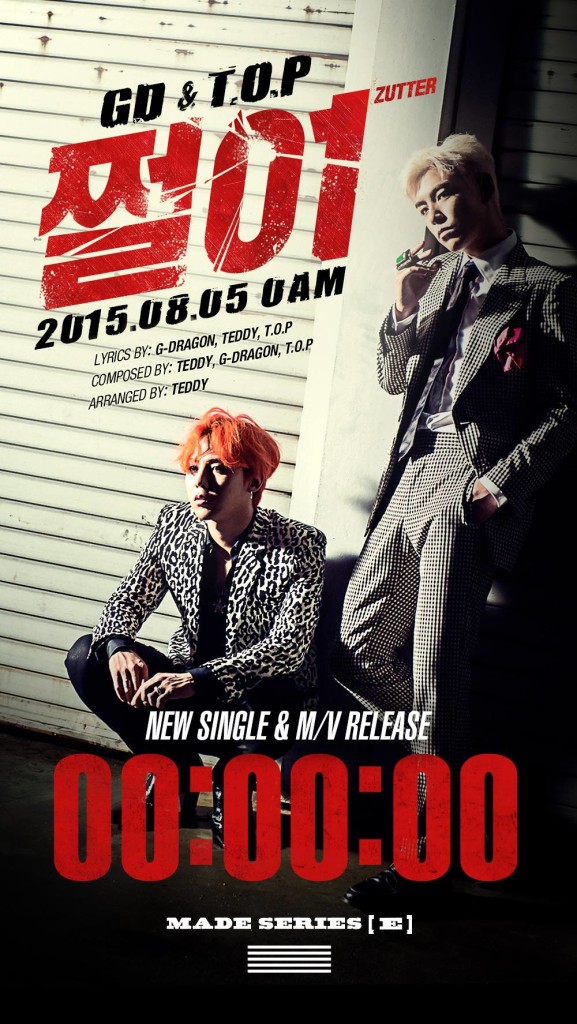 Just recently, the two music videos surpassed 1 million YouTube videos just hours after their actual release, proving their dominating and slaying power, not only in garnering views but also topping different charts domestically and internationally, making ‘Let’s Not Fall In Love’ no.1 and ‘Zutter’ also in the top 10 charts, even in iTunes. The music videos from the MADE SERIES like ‘Loser‘ , ‘Bae Bae‘, ‘We Like 2 Party‘, ‘Bang Bang Bang‘, ‘Sober‘, except for ‘If You’ which does not have a music video, all together accumulated more than 200 million views already which is another achievement and milestone for BIGBANG, proving their popularity not only in Korea but also worldwide, thanks to VIPs, YG and other supporters.

These two songs are like those in a separate poles in a magnet, with a different color and different genre, but the same quality – epic and entertaining!

BIGBANG just finished their Asian-leg for their BIGBANG WORLD TOUR 2015 MADE CONCERT  in Jakarta, Indonesia last August 1. And they are set to embark for their tours in Australia and different parts of United States of America. All four albums [M],[A],[D],[E] for their MADE SERIES already out in the market, there’s still the full album to wait for that includes all of the songs, and according to G-Dragon during their MADE CONCERT in Manila, anticipate for a bonus ‘Anthem Song of the Year’ for their full album MADE next month.

What can you say about these two songs and their thrilling and heart-thumping music videos? Share your thoughts below on our comments section, and catch more K-Pop update from us in Officially KMusic!