BIGBANG Promises Touching And Exciting Releases For MADE [D]

BIGBANG Promises Touching And Exciting Releases For MADE [D]

After the successful and epic back-to-back hits from May 1st’s MADE [M] album ‘Loser‘ and ‘Bae Bae‘, 2 more chart-burning tracks on June 1st’s MADE [A] album ‘Bang Bang Bang‘ and ‘We Like 2 Party‘, we wondered what BIGBANG and YG Entertainment could have in store for us next. We know now that they’re ready to melt our hearts with their upcoming mellow and sentimental ballad track ‘If You‘ and make us dance to another upbeat summer song called ‘Sober’ with their July 1st release of MADE [D] album. 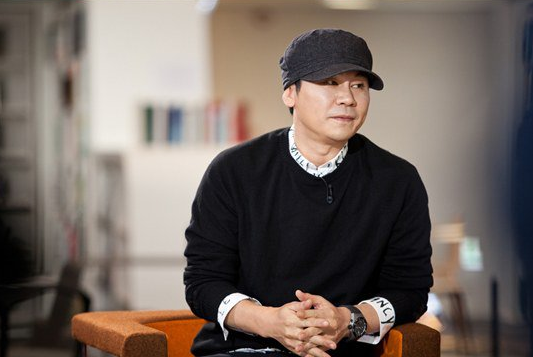 “I listened to the song and tears welled up. It is most likely the saddest song of all BIGBANG’s songs in the last 9 years. I am in my 40’s and I was moved significantly, so I am sure listeners in their teens or 20’s, or others, will find it very sentimental. I think it’s the first time that I am more excited about the release than BIGBANG is.”

He also added that it is considered his favorite among all the songs BIGBANG have ever released from the MADE SERIES album so far, and assures the fans that the song will surely melt their hearts and make them shed tears.

“It’s a little odd that they are releasing a sad song in this upbeat summer? I liked other songs in the MADE album, but if the public can feel what I felt listening to this song, then this is the right timing,” added YG.

On June 27, BIGBANG released an emotional and melodramatic concept photo for their upcoming single  ‘If You’. The concept poster shows what seems to be the heartbroken and sorrowful faces of the members, faces that remind us of our own melancholic past. The song was written by the group’s charismatic leader G-Dragon. It was also composed and arranged with P.K. and DEE.P as shown on the concept poster photo.

Most fans feel that it may be more heart-breaking than ‘Loser’ or may even have the same vibe as ‘Haru-Haru‘.

Here’s the teaser photo of the upcoming track ‘If You’ uploaded from their Official Facebook page, BIGBANG. 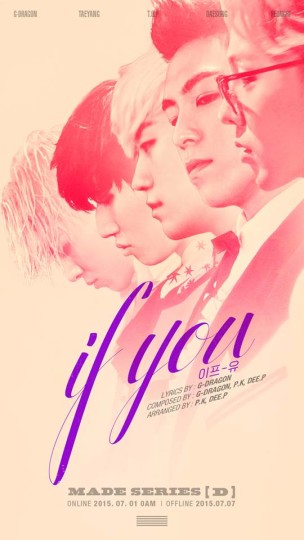 In his interview, YG also said,“The two tracks in July are completely different from each other, as one is upbeat and one is sentimental. ‘If You’ is a ballad, where rappers GD and T.O.P will also be singing. It will be new to the fans as well.”

On the other hand, the second concept teaser was released on June 28th, which shows the members in what seems to be a happy-go-lucky, carefree and The Sound of Music–like setting on top of the mountain. The members are wearing their turquoise shaded suits reaching for their “DREAMS“. This track, ‘Sober’ was written by YG head producer and 1TYM member Teddy Park with the help of G-Dragon and T.O.P. It was also arranged and composed by Teddy and Choice37 with the help of G-Dragon.

Fans speculated that it may be another fun song like ‘We Like 2 Party’ and ‘Bae Bae’ from previous months and that it will surely gives us that dancing feeling again. 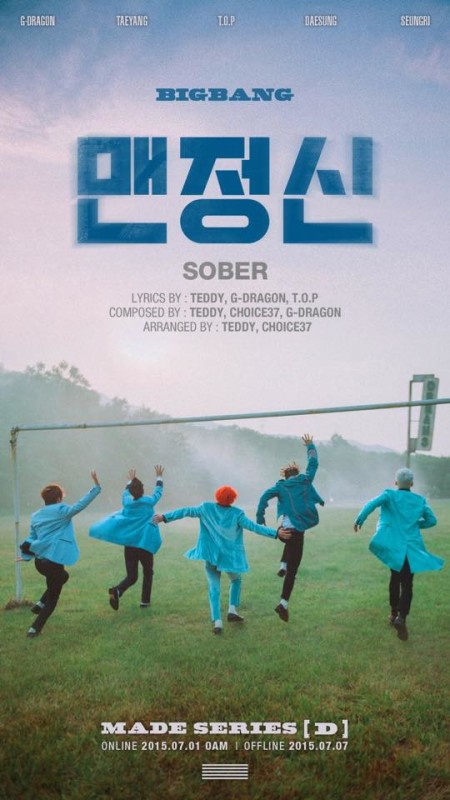 Despite their 3 year hiatus since their successful ALIVE album last 2012, these 5 artists are obviously still Kpop royalties and know how to give the best for their VIPs worldwide. The group continues to create major uproar and successful concerts with their 2015 WORLD TOUR [MADE] announcements and tops different major charts online.

Just recently, MADE SERIES music videos from YouTube made another milestone by garnering more than 100 million views. You may check out their other music videos here on their official YouTube channel.

So what do you think the new songs will sound like? What about the music videos? What are your thoughts about the new teaser photos? Share it with us on our comments section!

The new singles will be released both online on the 1st of July of 2015 at 0AM and both offline on the 7th of July which will also include instrumental versions. So stay tuned with Officially KMusic because we bring you all the latest news for Kpop!