It’s been confirmed that BIGBANG’s T.O.P and JYJ’s Junsu will be the next pair of idols enlisting early next year. On November 21st, the Seoul Metropolitan Police Agency confirmed that both idols passed their police conscription exam and will be serving their mandatory military enlistment on February 9th, 2017. 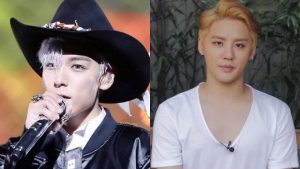 Both idol singers will begin their army training at the center in Nonsan and will then go off into their separate fields. Junsu will be in the promotions/public relations sector in Gyeonggi Nambu Provincial Police Agency, while T.O.P will serve in the band specialist position at the Seoul Metropolitan Police Agency. Both artists will continue promotions right up until their enlistment in February. T.O.P will be making a comeback with his group, BIGBANG this December, and will also be holding the final concerts for their current tour in Seoul this January. Junsu will be holding year-end concerts in Korea and Japan, and will also be starring in the new musical, ‘Death Note‘ this upcoming January.

What are your thoughts on these upcoming enlistments? Let us know in the comments below!