Officially Kmusic would like to wish VIXX’s Hyuk, Nine Muses’s Kyungri, and 15&’s Jimin all a very happy birthday! 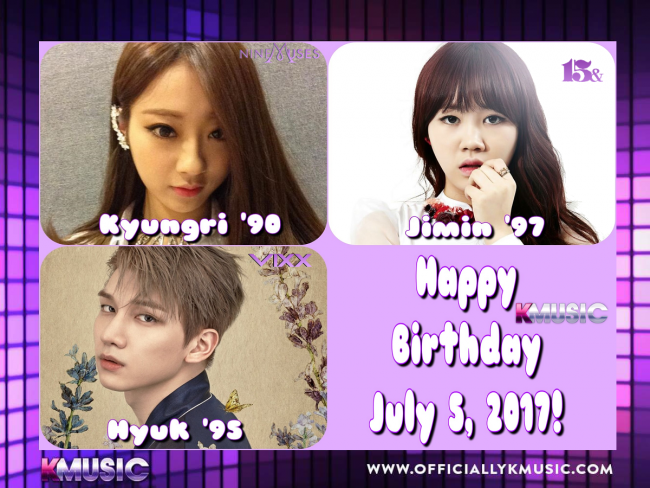 Things to know about Hyuk:

He is the youngest member of VIXX.

He is very shy around Leo and would be to scared to call him “hyung.”

He doesn’t own a cell phone; he prefers his iPad.

If he was a girl, he would date Hongbin.

Things to know about Jimin:

She and Yerin both speak English.

Yerin is only 9 days older than she is.

She is one of the co-hosts of After School Club along with Day 6’s Jae and Kevin Woo. (Eric Nam was replaced by Jae in mid 2016.)

Despite being Korean; she likes speaking in English better.

She often translates for the Korean speaking guests on After School Club.

She is a Christian.

She donated all her money from Kpop Star to charity.

Stay tuned to Officially Kmusic as we bring you the latest in Korean Entertianment!

Written by, featured image by and collage by: Admin Merry