Rookie group BLACK6IX are back!

BLACK6IX‘s comeback music video ‘Like a Flower‘ has finally been released! Check it out for yourself below:

‘Like a Flower‘ makes use of an interesting instrumental backing to keep the listener engaged throughout the whole song. The track is synth-heavy, but uses a variety of contrasting sounds to create a sound that stands out from many other current songs. The differentiation between the bright, glockenspiel-like sound featured in the intro and the synthesised echoes used throughout the verses keep the listeners guessing. The chorus is more typical of the pop style at the moment, but is balanced well by the more intense rap verse.

BLACK6IX‘s music video is full of contrast, playing on the differences between light and shade. The members dance in two distinct settings; a naturally lit forest and a darker, grittier basement. This contrast combined with the use of coloured smoke creates an atmospheric clip to accompany the uniqueness of the song itself. BLACK6IX also demonstrate their strength in dancing as they execute difficult choreography in perfect synchronisation. 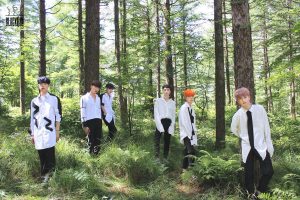 Believe it or not, BLACK6IX only made their debut a few months ago! Their debut track ‘Please‘ was released in April. ‘Like a Flower‘ sees the new group expanding their horizons and tackling a more mature sound. What do you think of BLACK6IX‘s comeback?