BLOCK B To Visit Their European Fans This October!

BLOCK B To Visit Their European Fans This October!

Are you ready European BBC? Block B is coming to your town soon!

That’s right! Block B announced their European tour on Twitter a few days ago. London, Budapest, Amsterdam, Lisbon and Helsinki is included in the list of cities where they will be stepping into.

This is indeed fabulous news for fans in London, UK! It has been awhile since there was a K-Pop concert in UK’s capital. Besides, having Block B there is a great achievement after long years of petitioning. The wishes of Block B fans have come true! 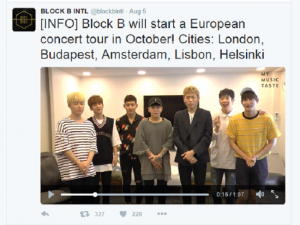 So far, there’s not much information released at the moment except the tour will begin in October of this year. That’s not all, BBC! For those of you who think you will miss them at their upcoming tour, Block B has a way for you to see them.

They are holding a voting contest together with MyMusicTaste.com, which is a crowdfunding platform. All you have to do is log into their website and vote for them to go to your city. Pretty easy, right? Block B is just a vote away, so hurry! Your city could be added to the list of their tour. 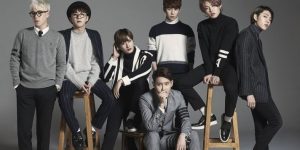 Block B, created by Cho PD, made their debut in April 2011 with the track ‘Wanna B’. The group consists of seven members, B-Bomb, Jae-hyo, Zico, U-Kwon, P.O. Tae-il, and Park Kyung. Throughout the years, the group had a long, tough journey of becoming stronger by the day. Today, Block B is a legendary, Korean Pop group which gains endless love globally. Not only do they shine as a group, but members are sparkling brightly as individuals, too.

The group is currently managed under the label, Seven Seasons. Their latest release was the ‘Blooming Period‘ album, of which the title track is ‘Toy’. Their other hit song in the same album, ‘A Few Years Later’, also gained equal popularity. Soon after, Block B released the Japanese version of ‘Toy’ in two editions, limited and regular.

Did your city win the jackpot? Again, cast your vote by clicking here to vote for a European city near you. Share your thoughts about this tour in the comments below

Stay tuned to Officially Kmusic to hear the latest news from the K-Pop world.

Scroll for more
Tap
J-Min Is “Ready For Your Love” In New Music Video Co-Starring SM Label-Mate, Johnny
EXID Will Be Launching Their Official Fan Club This September!
Scroll