Block B’s P.O To Sit Out Last Two Shows Of Europe Tour Due To Health Issues

Block B’s P.O To Sit Out Last Two Shows Of Europe Tour Due To Health Issues

Sad news for Budapest and London BBCs!  Block B’s maknae P.O. will not be attending the last leg of the ‘Block B 2017 LIVE BLOCKBUSTER IN EUROPE‘ due to health concerns.

The group’s agency, Seven Seasons has issued an official statement regarding P.O.’s condition which can be read below: 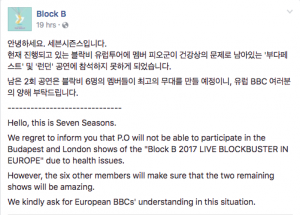 The other 6 members will continue on with the tour, but P.O. will surely be missed!

Officially Kmusic sends our well wishes to P.O and a speedy recovery!