After an announcement yesterday, BTOB have released the official schedule in preparation for their comeback for ‘New Men!’ The image continues a fun galaxy colored theme from the initial teaser.

The schedule includes a week chalk full of teasers, concept photos, tracklists, and more. This comeback is especially anticipated since the title song is self composed and this will be their first dance track since the release of ‘You’re So Fly‘ in September of 2014. The members have also been highly busy, with maknae Sungjae recording earlier this fall for his new drama, Goblin, as well as Changsub‘s participation in the popular show ‘Law of the Jungle.’ Melody’s are anxiously awaiting what’s in store for this comeback and will be waiting impatiently for what’s to come in the next week!

Check out the schedule below: 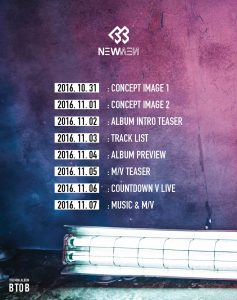