In what is shaping up to be one of the biggest comeback months that we have seen, Big Hit Entertainment have now confirmed the comeback date for BTS.

The news was shared via the BTS official fan café and stated that BTS would be releasing ‘Love Yourself Her’ on Monday September 18.

The mini-album has been described as the first album in the ‘Love Yourself’ series which will continue on into 2018.  The mini-album is said to portray young people who have fallen in love.

Check out the announcement made via the BTS fan café below: 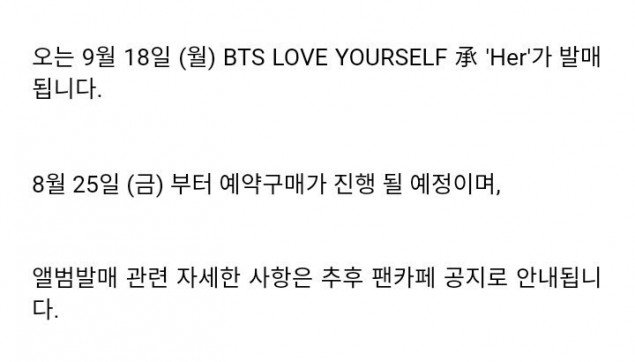 Pre-orders for the album will commence on Friday, August 25.  Their will be four versions of the mini album and will include a hidden track that was produced by Rap Monster.

There will be more announcements about the new BTS album made via the fan café.

Will you be pre-ordering the BTS ‘Love Yourself Her’ album?  Let us know in the comments below.