‘Blood Sweat And Tears‘ was a title track that took BTS to a whole new level with multiple awards and achievements. Now, the track’s music video has given BTS their third 100 million views achievement on YouTube!

The music video became the most watched Kpop music video in 2016, after it’s October release. Using the element of Moombahton Trap, the song became wildly popular, and showed off a more mature side of BTS.

Re-live the amazing music video below!

‘Blood Sweat and Tears’ also takes the spot of second fastest K-pop music video to reach 100 million views with a record of 134 days, coming in just behind TWICE’s ‘TT‘ which took 71 days. 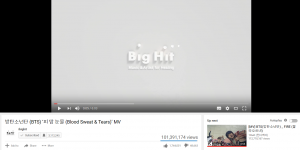 With dedicated fans at their side, BTS is sure to make another 100 million views achievement in no time!

Scroll for more
Tap
Dreamcatcher Does A Special Performance Of ‘Emotion’ For Fans
B1A4 Shines At the 2018 Olympic Festival!
Scroll
Loading Comments...