BTS’s Rap Monster is one idol currently enjoying the Pokémon Go app’s Korean release. He’s been on the hunt and recently named a few of his catches after his fellow members!

He took to Twitter to post screenshots of the Pokémon and the members they’re named after. Jimin and Jungkook got two each, hilariously relating to their changes from debut until now. Natu and Qwilfish are dedicated to Jimin, while Igglypuff and Machoke represent Jungkook.

V also got two Pokémon; one to represent his more playful side and another to honor his cooking skills. Suga’s Pokémon took the form of Quagsire, who was renamed ”Gentle Suga”. One fan then took it even further by posting photos of V and Suga side-by-side with their respective Pokémon! 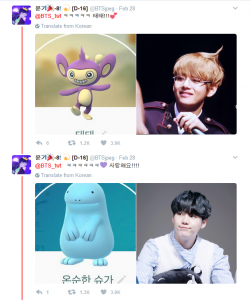 While Rap Monster has yet to pick Pokémon for Jin and J-Hope, suggestions of Ponyta and Chansey have been made.

What do you think of the Pokémon and their BTS counterparts? Let us know in the comments!