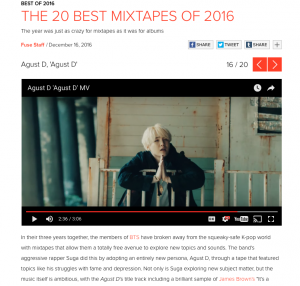 It seems that BTS’s Suga not only killed the rap game in Korea but internationally as well! His solo mixtape, ‘Agust D‘ which dropped in August of 2016 was featured in the ‘20 Best Mixtapes of 2016‘ by American news portal, Fuse TV. The mixtape was featured alongside acclaimed hip hop artists such as Chance The Rapper and Big K.R.I.T. Fuse acknowledged Suga’s new sound and hard hitting lines by stating that, “In their three years together, the members of BTS have broken away from the squeaky-safe K-pop world with mixtapes that allow them a totally free avenue to explore new topics and sounds. The band’s aggressive rapper Suga did this by adopting an entirely new persona, Agust D, through a tape that featured topics like his struggles with fame and depression.”

The column went on to praise the rapper and stated that,”Not only is Suga exploring new subject matter, but the music itself is ambitious, with the Agust D’s title track including a brilliant sample of James Brown’s “It’s a Man’s Man’s Man’s World” that would likely be super-expensive to clear for a regular album track. Call it unhinged K-pop. –Jeff Benjamin”

This isn’t the first time BTS has made one of Fuse TV’s top lists! The group was also recently featured on ‘The 20 Best Albums of 2016.’

Congrats to Suga for a great accomplishment!