It became a sad day to all the C-Clown fans world wide, as their label Wellmade Yedang confirmed the group’s disbanding.

C-Clown was obviously in an unstable status for awhile, going through various emotional situations. I don’t think a disbanding is something totally unexpected, but it was not expected to be this soon, for sure. A few months ago Rome‘s twitter gained attention with his messages such as  “They turned me into something that I am not. Never forget what I did for you.”, “I apologize to the fans , I really do! But I tried..I really did! It’s jus[t] too hard now ! Dw [don’t worry] y’all”, and the instagram too, as he changed his profile completely. That clued of his possible withdrawal from the group, or a break-up of the whole band.

However, after the confirmation of the end of band’s journey, today, Rome left some heart-touching messages on his twitter. 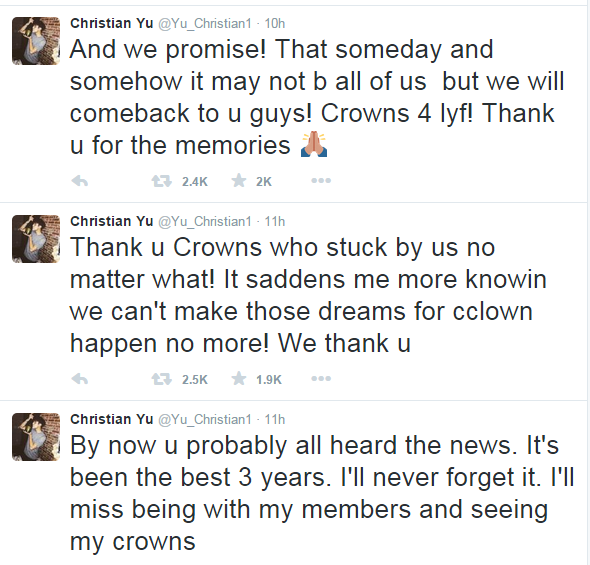 C Clown debuted in 2012, under Wellmade Yedang with the album ‘Not Alone‘, of which the title track was ‘Solo‘. The group was made of six members, Rome (Yu Ba-rom), Siwoo (Kim Tae-min), Ray (Kim Hyun-il), Kang Jun, T.K (Lee Min-woo), and Maru (Lee Jae-joon); and gained lot of love in time.

The group’s fancafe, SNS pages and the youtube channel will be closed respectively after a grace period of one month from 5th October, 2015. I’m sure even though they will go on their seperate ways, their love for CROWNs will remain eternal and C-Clown will never be forgotten. C-CLOWN forever.