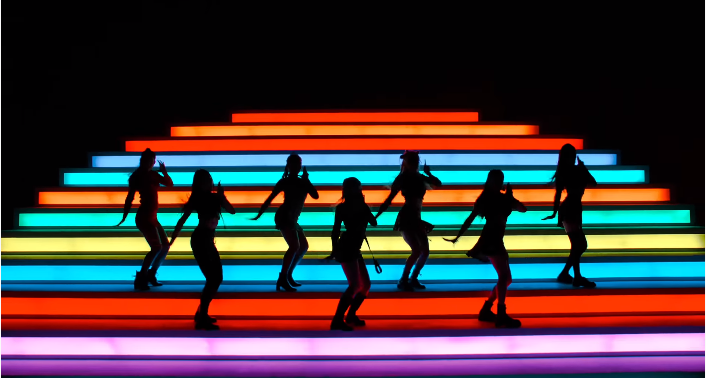 On February 3rd, C9 Entertainment’s new girl group, CIGNATURE released their debut MV for ‘Nun Nu Nan Na’. Check it out down below!

The MV starts with a scene of a phone ringing from CIGNATURE. Member Jeewon then answers it and says ‘We’re gonna make you feel something special’ before the song starts. The song itself mixes cute poppy elements with a subdued pre-chorus, along with an intense and catchy chorus as the title of the track is sung.

The MV has multiple group shots with the signature shot being one where the group is dancing on multi-coloured changing stairs, creating a fun atmosphere.

The group consists of 7 members, Chaesol, Jeewon, Ye Ah, Sunn, Seline, Belle, and Semi. Apart from members Seline and Semi, the other 5 members were formally part of the C9 Entertainment‘s girl group Good Day. There was no official announcement of the group’s status but judging by the fact members from the group are now in Cignature, the group could be disbanded. Furthermore, members Chaesol, Jeewon, Sunn and Belle participated in KBS‘s idol survival show, ‘The Unit’ back in 2017.

J9 Entertainment (the company Cignature is managed) was formed by C9 Entertainment to manage this group. How do you feel about the girlgroup’s debut? Let us know in the comments below!

Scroll for more
Tap
B.O.Y debut with wonderfully cinematic MV for ‘My Angel’!
ONG SEONGWU gets pulled by ‘Gravity’ into water in debut MV!
Scroll