CJAMM To Hit Up Sydney In April!

CJAMM To Hit Up Sydney In April!

After a successful show with BewhY, Super Sydney is back to bring you one of the hottest Korean rappers in the hip hop game! The Show Me The Money finalist will be hitting up Space Nightclub in Sydney for an exclusive show on April 21st! 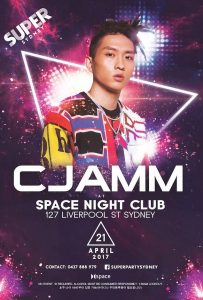 First 100 people to buy tickets will get a chance to win either meet n greets or signed posters! A total of 10 meet and greet tickets and 10 signed posters will be given to random 20 people out of the first 100 ticket buyers!

More details about the event can be found on Super Sydney’s Facebook page here.

Are you excited for CJAMM’s upcoming performance? Let us know in the comments below!

Scroll for more
Tap
Happy Birthday to PENTAGON’s Kino!
‘Running Man’ To No Longer Call It Quits And Will Continue With All Original Members!
Scroll
Loading Comments...