American news outlet, CNN recently featured CL in a short documentary for the STYLE page titled, ‘Breaking America.’ In the video she explained how she’s been putting in the time and energy and is serious about wanting to make it big in America. CL is not your average K-pop star or Korean girl and she wants everyone to know that.

“I don’t think about the fact that I’m Asian”, says CL in English. CL discussed her struggles of how she was perceived as just an “Asian girl.” She explained that in Asia you need a balance between the yin and yang. In America, it’s the opposite. “Here it is about being too strong,” says CL. CL’s fierce and edgy personality definitely show in her videos and performances! 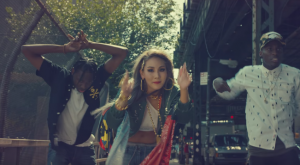 CL’s fashion designer friend Jeremy Scott called her a “global superstar.” With being a superstar, you get fans and haters. CL takes both and embraces it. “Even if they hate me, I love that I can do that to them.”

CL, we wish you the best of luck with your future activities in America!

The full video featuring CL can be found here. Check out a teaser clip of the STYLE documentary here: