Here’ the message from the fanclub manager below:

‘Hello.
This is FNC ENT fanclub manager.
CNBLUE Official Homepage (www.cnblue.co.kr) and FNC Entertainment Homepage (www.fncent.com) will merge to launch a new site on 6 February.
The homepage system transfer will take place from 1 February to 5 February.
During this period, it will not be possible to sign up for CNBLUE official fanclub membership. Therefore, if you wish to sign up, please do so by 31 January. (If you are unable to sign up by 31 January, you may sign up at the new homepage from 6 February onwards.) 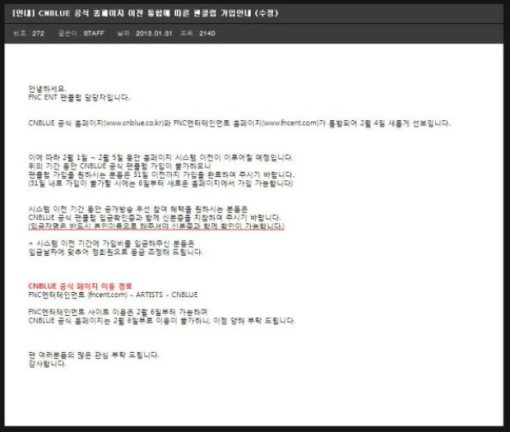 **note: It was stated in the official site that the merger will be made on February 4th, but instead it will be on February 6th.