June 24th, 2016 was the last “Music Bank” show that MCs Park Bo Gum and Red Velvet‘s Irene hosted, after a fourteen month long run which has increased the anticipation for who would have the honor to do the hosting for the show next.

On June 27th 2016, KBS News Time announced that the new emcees for “Music Bank” are CNBlue‘s Kang Min Hyuk and Laboum‘s Ahn Solbin. Amid the interview, Minhyuk says, “The MC spot was a spot that a lot of people wanted because it left the impression of being on a pedestal for stars.” Solbin says, “I will work hard to represent ‘Music Bank.'” 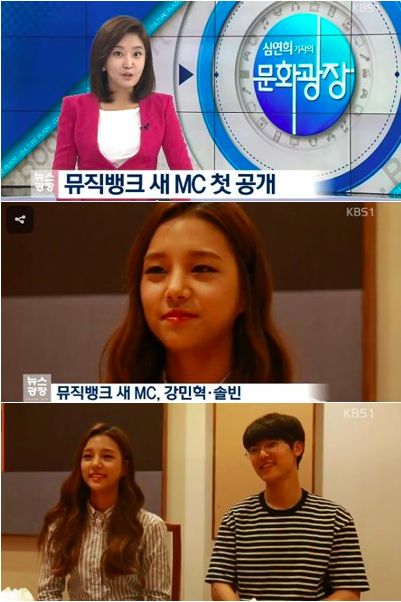 Kang Min Hyuk has partaken in various shows and dramas; and he is currently proving his talents as an actor in “Entertainer.” Solbin has participated numerous other activities other than singing which includes acting in music videos and modeling for fashion brands and magazines.

Let us know in the comments below of what you think about this new emcee pairing! Stay tuned with Officially KMusic as we bring you the latest news from Korean Entertainment!