Approximately two weeks ago, Cult of Ya began releasing teasers for a special event with a mystery artist taking place in London and Paris later this month. The teasers included an Instagram post with the Hashtag #GonBeAColdeJune and a tweet with an image of the wave emoji. Fans then began speculating that this mystery artist was Colde of the R&B and neo-hip-hop duo, OFFONOFF.

Cult of Ya has confirmed fans’ speculation by announcing a Colde pop-up store event at London and Paris Fashion Week on the 15th and 22nd of June. The event is said to commemorate the opening of Colde’s new brand WAVY, from Seoul. 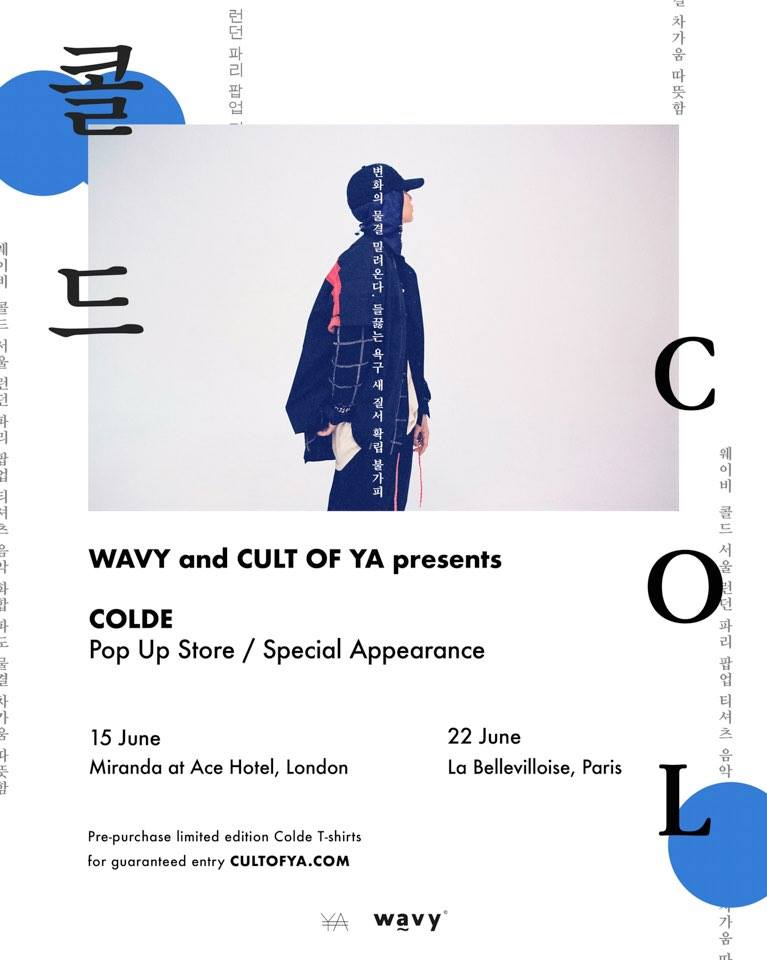 The events are open to the public, but Cult of Ya is also pre-selling T-shirts from Colde’s brand for guaranteed priority entrance to the event. Pre-sale of these T-shirts for the London event began online on the 10th of June on Resident Advisor and there are currently only a few of the T-shirts left. Whereas pre-sale of the T-shirts for the Paris event will begin on the 13th of June also on Resident Advisor. The event description includes Colde personally signing items that were purchased at the pop-up store and performing his latest tracks at the end of the evening.

Meanwhile, Colde has recently dropped his first single titled ‘Your Dog Loves You‘ featuring R&B artist, Crush. He has also participated in MNET’s new music battle show titled ‘BREAKERS‘ along with rapper Penomeco, R&B singer Jooyoung and many more. Earlier this year, Colde released the full-length album ‘Boy.‘ as part of the duo OFFONOFF featuring many well-known artists such as Tablo, Dean, and Punchnello. Colde is clearly becoming the new up and coming Korean artist that everyone needs to check out!

Below are more details regarding both events:

Cult of Ya is regularly releasing updates regarding both events on their Facebook event pages. So, do not miss this unique opportunity to see Colde and his new brand WAVY in Europe!

Source: Cult of Ya
Written by: Sarah El-Ali
Edited by: Tracey

Scroll for more
Tap
24K returning to Europe this August and it is going to be huge!
MMORPG MapleStory Holds Ticket Giveaway to GOT7’s “Eyes On You” World Tour U.S. Shows
Scroll
Loading Comments...