Crush to go on First Solo U.S. Tour In November!

Crush to go on First Solo U.S. Tour In November!

Amoeba Culture fans get excited, because R&B favorite Crush is holding his first ever solo tour in the U.S.!! 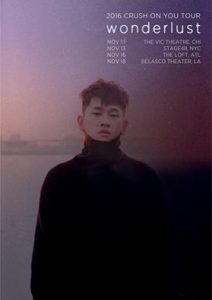 On September 20th, Amoeba Culture dropped the exciting news that R&B singer, Crush, will be extending his “Crush on You Wonderlust” tour to the United States from November 11th to November 18th. Tickets for the Seoul and European leg of the tour have already gone on sale, however, the U.S. sale is set to start on September 23rd at 3pm (local time). The concert will be promoted by  Powerhouse Live for this portion of the tour.

Check out the tour dates below:

Tickets will go on sale on Friday, September 23rd at 3:00pm local time via Powerhouse Live and the following links below:

The tour first kicks off in Seoul on November 5th at the Samsung Card Hall and will finally conclude in Paris, Milan, and London from November 24th to the 27th.

Which city will you be attending? Let us know in the comments below!